Things that make you go hmmm- If Greece was California 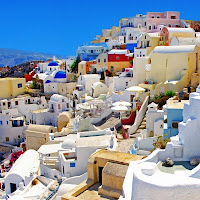 I have been reading furiously trying to grasp the complexities of the Greek bailout and to understand why the European leaders do not just let Greece default. To be brutally honest, I just do not have enough knowledge to comment intelligently about the topic. Many articles discuss a Credit Default Swap (“CDS”) crisis, a product and concept that is very hard to grasp when extrapolated worldwide.

I have read that a Greek default could cause CDS counterpart failure, much of it possibly in the U.S., and also could cause massive deficits in the Eurozone amongst other catastrophic events.Yet, I still ponder; if 50% of Greece’s debt has already been written off, why not just cut Greece loose? Greece is a basket case no matter how you paper the mess. Is it only a question of an orderly disaster vs. a disorderly disaster?

Striving to better understand this situation, I went to one of my retired partners who is fairly sophisticated on worldly matters, and during our conversation he said, “Why bail out Greece if the U.S. doesn’t bail out California? It took me a second to grasp where he was going with this, but what an interesting comment.

For all intents and purposes, both California and Greece are bankrupt.

I wonder how keen the other U.S. states would be to bail out California and whether the American people would have an appetite to do so. We do know the American government has shown no reluctance to do such for large American companies.

As noted above, I am no world economist or political pundit, and although California and Greece have numerous complex issues particular to each, one can also argue they are shockingly close in similarity. Think about that.


The blogs posted on The Blunt Bean Counter provide information of a general nature. These posts should not be considered specific advice; as each reader's personal financial situation is unique and fact specific. Please contact a professional advisor prior to implementing or acting upon any of the information contained in one of the blogs.
Labels: bailout, bankrupt, california, cds, Credit Default Swap, default, economy, greece