I'm back. I made it through yet another tax season. I request your indulgence for a paragraph, as I have one last rant about the timing of the issuance of tax season T-slips.

You would not believe (or maybe you would, since you are probably like many of my clients, who received their tax slips into the first ten days or April, let alone the number of amended slips received up to the third week of April) how many returns we had to amend or hold because of late or amended T-slips. With current technology and payroll services, I really don't see why the CRA does change the required issuance date for T4's and T5's from the end of February to either the end of January or the middle of February. This would allow the corresponding acceleration of T3's for public entities and T5013's to say March 1st or 15th (I would keep trust filings for private trusts to March 31st so they would not have to amend each return for the tax slips received after March 31st). By doing such, taxpayers could file their returns on a timely basis without being rushed and constantly amending their returns.

Okay, let's move on to today’s post, which contrasts and discusses retirement benefits under the social insurance systems of Canada and the United States. 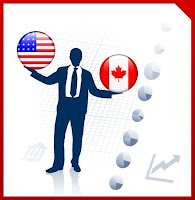 This post lays the groundwork for a future guest post by Alyssa Tawadros a senior manager U.S. tax with BDO Canada LLP, which will discuss various cross-border aspects of social insurance, such as:


As noted above, today’s post will compare retirement benefits under the social insurance systems of Canada and the United States. In Canada, this would be the Canada Pension Plan (CPP) and Old Age Security (OAS), and in the U.S. this would be Social Security.


The CPP is a contributory public pension plan administered for employees and self-employed individuals. It provides a basic level of earnings replacement in retirement for workers throughout Canada, with the exception of Quebec. Quebec workers are covered by the Quebec Pension Plan (QPP), which is an almost equivalent plan. For simplicity’s sake, we will focus on the CPP only. In addition to retirement benefits, the CPP also provides disability and survivor benefits.

Currently, when the contributor reaches the normal retirement age of 65, the CPP provides retirement benefits equal to 25% of the contributor’s pensionable earnings for the years that the contributor is aged 18 to 65. A certain number of months with lowest earnings may be automatically disregarded under a general “drop out” provision to account for certain periods when one wasn’t working (e.g. unemployment, attending school, etc.). The maximum CPP retirement pension one could be entitled to is calculated as 25% of the average of the maximum pensionable earnings for the last five years. For 2017, that maximum is $13,370.04. The average annual amount of benefit for new beneficiaries is typically much lower than the maximum. In 2016, the average amount of benefit collected was $7,732.202.

It is possible to apply for and receive CPP benefits as early as age 60, but the pensioner will receive a reduced amount. On the other hand, by delaying CPP benefits until the age of 70, the pensioner will get an increased benefit. Calculating what your benefit might be at retirement is quite intricate, but estimates can be requested for ages 60, 65 and 70 from the Service Canada website. In order to qualify for CPP benefits, the pensioner must be at least a month past their 59th birthday, have worked in Canada, have made at least one valid contribution to the CPP, and want their CPP retirement pension payments to begin within 12 months.

You may be aware that in 2016 the government introduced Bill C-26, which sets out amendments to enhance CPP benefits. The main changes will be an annual payout target raised up to 33% from 25% and to increase the Year’s Maximum Pensionable Earnings to $82,700 when the program is fully phased in by 2025. The program will be funded by an increase in contributions by employees and employers from 4.95% to 5.95%, phased in slowly starting in 2019. In today’s dollars, the Department of Finance has indicated that the maximum benefit under the enhanced CPP will increase to nearly $20,000.


OAS is a government program that provides a basic level of retirement income and is funded out of the general revenues of federal government. It is not tied to past work history or funded through payroll taxes. It operates as a monthly payment available to seniors aged 65 and older who are Canadian citizens or legal residents living in Canada or elsewhere – provided that the minimum residence requirements are met. In addition, low-income seniors who qualify for OAS may be eligible for the Guaranteed Income Supplement (GIS), which is a tax-free benefit. To qualify for the GIS in 2017, a single pensioner’s income must be $17,544 or below and married pensioners’ 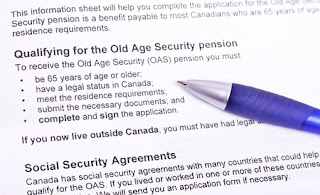 The OAS maximum monthly benefit for 2017 is $578.53. The benefit is subject to a reduction also known as a “clawback” starting at incomes of around $70,000. The benefit is fully clawed back at incomes around $120,004. It should be noted that when people complain their OAS is clawed-back, it is not their own money, but the governments money. Here is a link to a post I wrote on strategies to reduce the claw-back.

How Does Social Security Compare?


Social Security is similar to CPP in that it is a mandatory publicly-provided system providing retirement assistance which is funded by contributions from employees and employers and the self-employed. The funding is by way of FICA taxes (FICA stands for Federal Insurance Contributions Act) where contributions to Social Security are 12.4% of eligible earnings. Similar to CPP, half (6.2%) is paid by the employee and half by the employer. Those who are self-employed are liable for the full 12.4%, but receive a deduction for 50% of their contribution on their tax return to represent the “employer” portion. Similar to CPP, there is a maximum earnings cap known as the “wage base limit” which is $127,200 for 2017. So as you can see, Social Security requires higher annual contributions than CPP, mainly because the both maximum pensionable earnings and contribution rate is significantly higher.

Using our example from above to compare both systems, the individual earning $130,000 a year would contribute the maximum under both systems since the salary is higher than the maximum earnings cap in both countries. For 2017, the individual would contribute $7,886.40 to Social Security ($127,200 x 6.2%) or $2,564.10 to the CPP (ignoring exchange rate considerations). 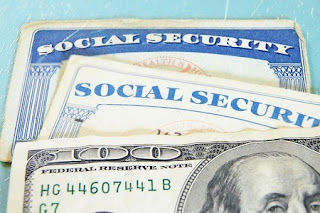 With a high contribution you would hope it would come with a high reward at retirement – especially since the U.S. does not have an analogous program to OAS. Social Security is a credit-based system and the number of credits one has determines whether one is eligible to collect. In 2017, one credit is received for every $1,300 in earnings up to a maximum of four credits per year. To claim retirement benefits, 40 credits are needed, generally representing ten years of work. However you can’t collect retirement benefits until you earn 40 credits and reach the age of 62 or older. Retiring at age 62 is considered early retirement, with the full retirement age being 67 for those born in 1960 or later. Similar to CPP, if one collects early starting at age 62, they get a reduced payment. Conversely, if they wait to collect after age 67 they get a higher payment, which tops out at age 70.

The retirement benefits depend on how much money was earned during one’s working years and when they started collecting. The program was designed to replace roughly 40% of pre-retirement wages for an average earner. Getting the highest benefit possible means that the income must have been at or above the Social Security ceiling each year for at least 35 years. In 2017, the maximum benefit for one retiring at the full retirement age is $32,244. However the published average benefit for 2016 was around $16,092. Similar to CPP, the average collected is typically less than the maximum benefit.

Expanding CPP – was it a necessary step?


Currently, Social Security covers a much higher income range (and requires a higher contribution) than CPP and generally aims to replace more pre-retirement wages than CPP. However, the U.S. does not have an analogous program to OAS. Social Security tends to provide a larger benefit at retirement to those who were high income earners during their working years in comparison to CPP and OAS. In contrast, Canada’s system can provide more benefits to those who had lower incomes when they are working. This is consistent with the Department of Finance’s study that found lower income families had the lowest risk of undersaving for retirement as OAS and CPP benefits provide a relatively high income replacement at their income range.

CPP reform appears to be targeted more toward middle class families. The Department of Finance found that 24% of families nearing retirement age are at risk of not having adequate income in retirement to maintain their standard of living. They also suggest that roughly 1.1 million families will have trouble maintaining their standard of living at retirement. The Department of Finance identified a number of factors which have increased the level of savings required, such as the decline of workplace pension plans, the shift from defined benefit plans to defined contribution plans, and younger workers living longer lives. The enhancement to the CPP is meant to provide higher, predictable retirement benefits. Although the mandate is arguably needed in today’s world, both employees and the employers must now take on a higher burden through increased contributions. Where labour can often be one of the largest costs of a small business, the increase in contributions lowers the bottom line and can be an inhibitor of growth. Ideally, the gradual phase-in will help small businesses integrate the changes into their business and financial planning.

I would like to thank Alyssa Tawadros, Senior Manager, U.S. Tax for BDO Canada LLP for her extensive assistance in writing this post. If you wish to engage Alyssa for individual U.S. tax planning, she can be reached at atawadros@bdo.ca


This site provides general information on various tax issues and other matters. The information is not intended to constitute professional advice and may not be appropriate for a specific individual or fact situation. It is written by the author solely in their personal capacity and cannot be attributed to the accounting firm with which they are affiliated. It is not intended to constitute professional advice, and neither the author nor the firm with which the author is associated shall accept any liability in respect of any reliance on the information contained herein. Readers should always consult with their professional advisors in respect of their particular situation. Please note the blog post is time sensitive and subject to changes in legislation or law.
Labels: Alyssa Tawadros, canada pension plan, CPP, oas, old age security, public retirement system, Social Security