This is the second blog post in a series on public retirement systems. The first post, compared CPP/OAS in Canada to Social Security in the United States.Today's post discusses the 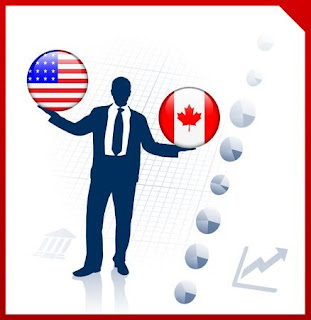 Totalization Agreement between Canada and the U.S. which affects Canadians and Americans that have worked in both countries over their working lives.

For many Canadians, contributing to CPP throughout their working lives doesn’t require much thought. It just happens with the understanding that when retirement comes they will be able to collect the money that they put in. However, for those Canadians that spent a portion of their working lives in the United States or vice versa, the proverbial waters become a little muddy.  Questions often arise concerning whether the worker must pay social security taxes in two countries while they work as well as which country’s benefits (or both) they are entitled to when retirement comes around.  The answers to these questions and more can be found in the Totalization Agreement between Canada and the U.S.

What is a Totalization Agreement?


The Totalization Agreement came into effect on August 1, 1984 with the purpose to integrate social security protection for individuals who have worked in both countries over the course of their lives.  Without the agreement, some workers would not be eligible under the respective countries’ requirements to collect retirement, disability or survivor benefits despite having made contributions to the plan.  The agreement also helps prevent people from having to pay social security taxes to both countries on the same earnings, which is commonly referred to as “double taxation”.


Let’s take the example of an employee who works for a Canadian company whose Canadian employer requires them to temporarily to work on a project in the U.S.  The employee is now subject to the U.S. taxation system, and both the employee and employer are subject to U.S. FICA taxes (Social Security and Medicare). This is a fairly expensive detriment as you recall from Part 1, since the U.S. FICA contribution requirements are much higher than CPP.  In addition, the employee would still be required to make CPP contributions, and hence would be subject to double taxation.


The Totalization Agreement can provide relief from this double taxation dilemma.  As this is a temporary assignment, the employee can seek exemption from the FICA taxes provided that the assignment is five years or less.  The employee will then only be required to make CPP contributions while they work abroad in the U.S.  However, this exemption is not automatic.  A request for a Certificate of Coverage must be completed and sent to the CPP/EI rulings Division of the Canada Revenue Agency in order to claim the exemption.

It’s important to note that this exemption is not available when a Canadian moves to the U.S. to work for a U.S. employer, even if it is temporary.  In this case, the employee and the employer would contribute to FICA, but would not be required to contribute to CPP on those same earnings.  It is possible in this situation that the Canadian would have now contributed to both Canadian and U.S. social security programs during their working life.  This leads us to our next section on how one navigates entitlement to claim their benefits when they have contributed to social security programs in both Canada and the U.S.

Using the Totalization Agreement to Qualify for Benefits


In Part I, I discussed eligibility for U.S. Social Security where one had to have 40 credits, or 10 full years of work, in order to qualify for U.S. social security.  An employee who has spent time working for employers in Canada and the U.S. may find that although they made contributions to U.S. Social Security, they lack the requisite 40 credits to be eligible to claim benefits.  The Totalization Agreement assists in this regard by allowing the employee to “totalize” the partial eligibility rights accumulated in both countries so that the employee can use their years of CPP contributions in Canada to count toward the 10 year eligibility requirement for U.S. Social Security.  Qualifying for CPP would typically not require the use of the Totalization Agreement, as the eligibility threshold for CPP is much lower than the U.S. where only one contribution is needed to qualify for CPP benefits.


Conversely, for an American who moved to Canada but lacks the Canadian residency requirements to qualify for OAS, the Totalization Agreement requires Canada to consider U.S. Social Security credits earned when determining if OAS residence requirements are met.


In some cases, the employee may have contributed sufficiently to U.S. social security and CPP and therefore qualifies for both pensions without requiring the assistance of the Totalization Agreement.  In this case, U.S. Social Security benefits may be subject to reduction due to the Windfall Elimination Provision (WEP).  The calculation of Social Security benefits generally favours low income workers.  So this provision promotes fairness by providing a reduction to the benefits in the case of someone who earned a high income but was not subject to Social Security taxes on much of it, which may be the case of a Canadian who also worked in Canada and contributed to CPP during their lifetime.  If the employee earned more than 120 credits (representing thirty full years), then the WEP is not applied.


I would like to thank Alyssa Tawadros, Senior Manager, U.S. Tax for BDO Canada LLP for her very extensive assistance in writing this post. If you wish to engage Alyssa for individual U.S. tax planning, she can be reached at atawadros@bdo.ca.

This site provides general information on various tax issues and other matters. The information is not intended to constitute professional advice and may not be appropriate for a specific individual or fact situation. It is written by the author solely in their personal capacity and cannot be attributed to the accounting firm with which they are affiliated. It is not intended to constitute professional advice, and neither the author nor the firm with which the author is associated shall accept any liability in respect of any reliance on the information contained herein. Readers should always consult with their professional advisors in respect of their particular situation. Please note the blog post is time sensitive and subject to changes in legislation or law.
Labels: Alyssa Tawadros, CPP, oas, Social Security, Totalization Agreement, Windfall Elimination provision, working in Canada and the US