A few housekeeping matters before we begin. This is my last blog for 2011, so I would like to wish my readers a Merry Christmas and/or Happy Holidays and a Happy New Year.

Last week I had a bit of a moral dilemma in relation to the Bloggers for Charity contest when I received a bid of over $1,000 from Sarah a grade 11 student and Founder of the Me to We club at Oakridge Secondary School in London. Sarah bid on behalf of the club, to be a Blogger for a Day, to blog about the schools charity of choice. The club has raised $1,076 to date to go towards building a school in Kenya through Free the Children. Although I appreciated the bid, I felt it was not in the spirit of the contest; that being the donation should be a donation that was only made because of the opportunity afforded by being a guest blogger and not a pre-ordained donation. I thus decided against accepting the bid. However, since the Bloggers for Charity contest mission was to raise awareness for charitable giving and I was so impressed by what the students at Oakridge have done, I decided post an excellent mini-blog by Sarah. The blog politely admonishes us adults and discusses the clubs charitable efforts. Sarah's blog post follows below.

Thus, after all that, Tim Penner hangs on with a bid of $250 and will be my Guest Blogger on January 17, 2012. I have decided to match Tim's winning bid and will donate $250 to the Make-A-Wish Foundation of Canada.

Finally, I have recently experimented with some technical income tax posts, however, I will return to less technical posts in 2012. That is not to say I will not have any income tax blog posts, but the discussion will just be little less technical in nature. I have some great tax and non-tax topics on my agenda for 2012.


The 2011 Federal budget proposed rules to eliminate the income tax deferral for corporate partners. Many partnerships were unaware they had a time constraint to make an "alignment election" so that the partnership would have the same year-end as the corporate partners. Last Friday, the Minister of Finance Jim Flaherty announced the government will consider late alignment elections as filed on time if filed on or before January 31, 2012.


As noted in a prior blog the Globe and Mail was reporting the IRS was considering waiving filing penalties for US Citizens who live in Canada and had not filed the required U.S. income tax returns. Last week the IRS posted this Information for U.S. Citizens or Dual Citizens Residing Outside the United States.

Assuming there will not be further specific special relief for Canadians; penalties will only be waived where the IRS feels there was "reasonable cause" for the initial non-filing. Reasonable cause is discussed in the link above and appears very subjective.

If you are a U.S. citizen or dual resident living in Canada and have not filed prior U.S. income tax returns, I urge you to engage a U.S. tax specialist to advise you moving forward. If you filed previously and were subject to penalties, you will want to touch base with your tax preparer to see if the reasonable cause provision can be used retroactively to obtain a refund of penalties already paid.

A guest post by Sarah, On behalf of the Me to We Club, Oakridge Secondary School, London, Ontario 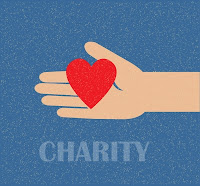 The Blunt Bean Counter initiated bloggers for charity as a means of promoting charitable giving. Although my school club’s fundraiser did not fit the qualifications for the bid, Mr. Goodfield has generously offered space for this guest posting.

Today’s youth are often criticized for being apathetic and disengaged, but I am writing today to demonstrate that this stereotype is not true. This year, a group of students at Oakridge Secondary School founded a Me to We club. We were inspired by the Me to We organization, an international movement of socially aware and involved youth. As a club we didn’t just want to meet at lunch, we wanted to make a real difference! We set achievable goals for both local and global initiatives.

Our first event was Halloween for Hunger. Most adults roll their eyes when they see teenagers on their doorstep on Halloween, but we weren’t asking for candy for ourselves; we were collecting food. Our club collected 2741 pounds of generously donated food for the local food bank!

As students we are particularly motivated by the plight of less fortunate children around the world. Recently we participated in the Vow of Silence. We had two goals, the first being to raise awareness of children who are silenced by poverty, exploitation, and the denial of their basic rights. Our second goal was to kick off our year long campaign to raise money to build a school in Kenya, to help give youth an opportunity to receive an education and create a better future for themselves and the world.

Our Me to We club was formed out of our passion to be the change and make a positive difference in the world. Remember this success next time you are approached by your son, daughter, or neighbour, and be generous with your support. We are not just the leaders of tomorrow; we are the leaders of today!


The blogs posted on The Blunt Bean Counter provide information of a general nature. These posts should not be considered specific advice; as each reader's personal financial situation is unique and fact specific. Please contact a professional advisor prior to implementing or acting upon any of the information contained in one of the blogs.
Labels: alignment election, dual resident, Free the Children, IRS, Make-A-Wish Foundation, Me to We, oakridge secondary school, partnership, reasonable cause, US citizens, Vow of Silence

© All rights reserved. The Blunt Bean Counter at 6:26 AM
Email ThisBlogThis!Share to TwitterShare to FacebookShare to Pinterest