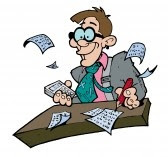 For all those readers waiting with bated breath, yes, Confessions of a Tax Accountant will be back by popular demand (if two emails requesting such constitutes popular demand).

I will start this year’s series next week (I will try and clarify the confusion surrounding the interaction between the new Children's Arts Amount, the Children's Fitness Amount and claiming child care). However, my first confession of the year is that because of client projects, integrating a new practice into our firm, the ridiculous amount of personal income tax returns now done in April (because the T-slips are often issued so late) etc. my confessions may be more sporadic in 2012.

Ode to the Toronto Maple Leafs

One advantage of having your own blog (besides the groupies) is that you can blog about whatever is on your mind. So last week as yet another Toronto Maple Leafs season appeared to be dissolving in front our eyes, I felt compelled to write this ode to the Maple Leafs, based on the Frankie Valli and the Four Seasons song, Oh What a Night. After writing this ode, the Leafs fired Ron Wilson and hired Randy Carlyle, so I thought maybe this ode may be a bit premature. However, after observing the Leafs terrible defensive zone coverage against the Bruins last night, winning a Stanley Cup would seem to require Divine Intervention, so I am still posting this ode, as the sentiments unfortunately appear to still be valid.

Don’t ask me how this crap, I mean prose, pops into my head, I have no idea. Hopefully, the above noted Miracle on Ice takes place and I can write another verse about how the Leafs rose from the dead to make the Playoffs and win the Cup (I am on some strong cough medicine). So here it goes:

Oh, what a night
Early May back in '67
A little boy saw the Leafs win the cup and felt like he had gone to heaven
What a very special time for me
Cause I remember what a night

Keon, Mahovlich, Baun, Horton and Bower were just some of the names
When Armstrong scored to make it 3-1, who knew it would never be the same
45 years and counting without a big game
Oh, what a Cup, Oh what a night

Oh, I was 8 and got a happy feeling when they drank from the Cup
It was great beating the Habs and we did not even need to use Duane Rupp
I darted like Red Kelly about the room
As I recall, the celebration ended much too soon
Oh, what a victory, Oh what a night

Forty-five years later it is still a mesmerizing sight
It was everything I dreamed it would be
Sweet Stanley, Oh, what a night

Early January, 2012, I felt a rush like a rolling bolt of thunder
Playoff hope spinnin' my head around and taking my body under,
The Leafs looked secure atop the standings, Oh, what a heady month

But I got a funny feeling as February grew longer
In the dressing room the boys looked tense and somber
The hope of January ended much too soon.
Oh, just another sad season ending with a swoon

Why is it taking so long to see the playoff lights
Now it all seems so wrong, when things looked so bright
Oh, what a team, what a drought

Okay, I know what you are thinking; Mark stick to the tax, estate and financial blogs. I know, I know.


The blogs posted on The Blunt Bean Counter provide information of a general nature. These posts should not be considered specific advice; as each reader's personal financial situation is unique and fact specific. Please contact a professional advisor prior to implementing or acting upon any of the information contained in one of the blogs.
Labels: confesssions of a tax accountant, income tax, income tax planning, Oh what a night, personal income tax, stanley cup, t1, Toronto Maple Leafs

© All rights reserved. The Blunt Bean Counter at 12:14 AM
Email ThisBlogThis!Share to TwitterShare to FacebookShare to Pinterest