How much Control do I have from the Grave? 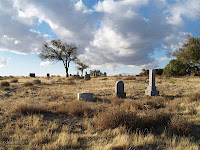 Last week I wrote a blog post on the virtues of spending some of your kid's inheritance on a family vacation while you are alive. That post reflected my personal philosophy that a parent(s) who is/are fairly certain that they will have more cash than they will require for retirement, should consider partial gifts to their children or grandchildren while alive. My rationale is simple: why not receive directly or vicariously, while alive, the pleasure and joy from those gifts, rather than giving from your grave.
However, I understand that viewpoint is not held by all, and that some people only wish to distribute their wealth after they die. In addition, there are some people who not only wish to wait until they die to distribute their wealth, but wish to continue to control their wealth after their death.

For a discussion on whether it is actually possible to control your wealth from the grave; today I have a guest blog post by Albert Luk, a lawyer, who is an estate and wills specialist.

How Much Control do I Have From the Grave?

If nothing else, Charles Millar had a good sense of humor. The lawyer turned entrepreneur stipulated in his will that on the ten year anniversary of his death a portion of his estate was to be given: “to the mother who has since my death given birth in Toronto to the greatest number of children…” Given Millar was a wealthy man in life, and his estate well managed in death, the baby bonus was worth approximately $750,000: a small fortune to the depression era mothers hoping to win the prize. The ensuing local baby boom would be known as The Great Stork Derby.

Charles Millar’s estate represents one end of the will planning spectrum. A testator (the legal term for the will-maker) rather whimsically plays one final practical joke on the world. On the other end of the spectrum, testators attempt to control the lives of their beneficiaries from their graves, sometimes with the best of intentions but sometimes for more sinister purposes. It is not unusual for a frustrated father-in-law to write: “To my son, I give the sum of $50,000.00 if he divorces his wife” in a will.

To testators, the question often becomes, “How much control can I assert from the grave?” To beneficiaries, the question is often asked, “Do I really have to conform to those conditions in the will?”

The answer, as usual, is that it depends. Conceptually, it is possible to give a gift with conditions. The analysis is often whether the conditions themselves survive scrutiny or how long of a reach one truly has from the grave.

A general and non-exhaustive review of the Canadian law provides the following information:

In summary, one’s reach from the grave can be quite long if the will is properly crafted. Courts have held in the past conditions which are positive (“I give my daughter $10,000 if she graduates high school and $25,000 if she earns a university degree”) are generally enforceable. Conditions which are progressively more restrictive are correspondingly more difficult to enforce if not struck down altogether. If struck down, the gift is usually granted without some or all of the conditions.

The key is that anyone looking to impose positive or negative conditions in their will, or any beneficiary subject to conditions, should seek qualified legal advice to determine their rights.

As for The Great Stork Derby, Millar’s estate survived challenges to the clause, withstanding even Supreme Court of Canada scrutiny. He was, after all, a lawyer. Four women each won $125,000 (over $1.5 million today) having nine (!) children in the ten year period. Two women—each having had ten children, but several out of wedlock (remember, this was the 1930’s)—sued the estate and settled for $12,500 each.

Albert Luk is a lawyer at Devry Smith Frank LLP, a Toronto based law firm who act as trusted advisors and advocates for corporations, individuals and small businesses. His particular expertise is in advising owner-managers on their business affairs and planning their wills and estates. Albert can be reached directly at albert.luk@devrylaw.ca.

© All rights reserved. The Blunt Bean Counter at 12:25 AM
Email ThisBlogThis!Share to TwitterShare to FacebookShare to Pinterest