I need another week to rest my brain post tax season before I get back into more technical or philosophical blog posts. So I am going to write about some travel travails a friend and I have experienced in the last few months. My story is of luggage lost and then found; but my friend’s story is so outrageous you could never make it up and I bet you laugh out loud at the end of the story.

No Luggage, No Big Deal 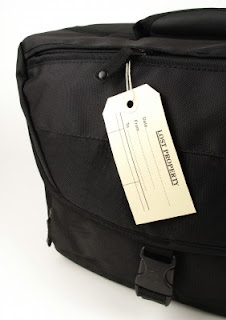 straight answer, I don’t think the bag ever even left Toronto.

This post is not intended to be a rant piece. So, I am just going to say that Air Canada’s policy to only reimburse you $50 a day for replacement clothes and toiletries for the first two days to a maximum of $100 is absurd

So I have no bag, only running shoes, a hoodie, a sweater, jeans, one t-shirt and what I carried on the plane – that being a bathing suit, tank top and flip flops. In my infinite wisdom I had not carried any toiletries or medication; considering I had pulled a muscle in my back the week before, not taking some pain relievers in my carry-on bag was a stupid move on my part.

As our hotel in Samana was in a somewhat remote location, there was not exactly a Wal-Mart around the corner. For $140, I purchased from the hotel store: deodorant, shaving cream, a razor, a toothbrush and toothpaste, an ugly Hawaiian patterned bathing suit, a t-shirt and a circa Miami Vice drug lord white short sleeved four pocket casual white dress shirt for dinner (I eventually got Air Canada to reimburse me for the entire $140, plus I worked them for another concession).

For one week I made do with two bathing suits, two pairs of underwear (one from my son), three t-shirts (one a free giveaway from the hotel), my jeans, one tank top, a hat from my friend and my Miami Vice shirt. In all honesty, if I had two more pairs of underwear, a pair of shorts, a pair of Dockers and a couple shirts to change for dinner I would have been good – this trip made me realize how little one really needs to pack for a week-long beach holiday.

Although I was cranky the first two days, on the third day I told myself to accept the situation and make the best of my holiday. I learned to live with my limited wardrobe and my wife, family and friends had some fun at my expense. Every morning on the beach, I would be asked if that was a new bathing suit, each night I would bum hair gel off my son (yes, despite my lack of hair, I still need gel to hold down what’s left). When I arrived for dinner a gag developed as to what I had put in the four pockets of my shirt that night. So I would put anything I could find from toothpicks, to mints, to matches, etc. The point being, sometimes you just have to make the most of what you have.

In the end, I realized I was lucky to be in the Dominican Republic, with or without luggage. Once I adjusted my mind set I was able to have fun and enjoy my vacation, as best I could.

While losing one's luggage on a beach holiday can be overcome, losing or having your baggage misplaced on a cruise or sightseeing trip can be devastating. If you want some tips on how to protect yourself from lost luggage and how someone fought back against a Cruise Line when they lost her luggage, check out this article by Ellen Roseman of the Toronto Star.

Is That Your Rental Car?


My misplaced luggage story is pretty common place and mundane. My friend’s story on the other hand could not have been concocted by Steven Spielberg.

My friend and his family went on a Caribbean vacation this Christmas and stayed at a nice hotel.

They also rented a standard sedan car, the type that if you don't jot down the licence plate would be indistinguishable in a parking lot.

My friend was enjoying his vacation, but like many North Americans who are not used to the slow pace in the Caribbean, he became impatient waiting for the hotel valet to get his car each morning and night. He thus asked for his keys so he could get his own car. For the next couple days he retrieves his car himself and they drive around the island in relative comfort. The only issue is that they misplace their maps and get lost one day.

On the fifth day of his vacation, he goes down to the parking lot to get his car and it will not start. He is obviously less than pleased, as he will now have to deal with the car rental office and try and get a replacement car during Christmas, which he figures could be problematic.

He gets out of the car and opens the hood. (This raises a totally separate issue as to why most of us even bother to open the hood when a car does not start, since we do not even have a clue what is under the hood, but I digress). After he closes the hood and comes around the car he is met by tall and burly hotel security guard, actually the head of security. He is asked if there is a problem and he tells the head of security that his car will not start. However, the security person is not really interested and asks him if he can provide the rental car agreement. My friend, not sure why he is being asked for the agreement hands over the papers. The head of security asks him if his name is Tom Wilson (made up name) of Tennessee. At this point, knowing this is not his name; my friend starts to feel uneasy and is asked to accompany the security person to a room. He is then told that the reason the car did not start was that the hotel had pulled the engine wires as the car has been reported stolen. My friend now understands what has happened, but in a Caribbean country in a small locked room with two large security agents, I imagine he is thinking Midnight Express and getting worried.

While this is happening, his wife has now gone to reception and is giving the hotel a what for and threatening to call the Canadian Consulate and trying to find out what the hell is going on and where her husband is. As the story starts to come together, my friend’s daughter realizes what has happened and goes looking for a similar car and finds the car they were initially provided sitting in the lot, unused, with the missing maps.

It turns out the valet had provided my friend with the keys to the wrong car and the cars were so similar, nobody noticed it was the wrong car. Meanwhile, Mr. Wilson had his holiday ruined by not having a car and having to deal with reporting a stolen car. The hotel security was dumbfounded as to why a stolen car was being taken and returned each day by the thief. Why they did not act expediently once they realized this, is another question.

Anyways, one can only imagine the mess this caused and once the truth emerged, how everyone involved must have shaken their heads in disbelief. Despite all the hotel security had put my friend through; the hotel initially wanted my friend to cover Mr. Wilkinson’s car rental costs. However, as the story unraveled, they quickly changed their tune and provided free massages and a nice bottle of wine to my friend. As for Mr. Wilson, I am not sure how he was made whole; I understand he was not pleased with the whole episode.

That concludes this week’s episode of travel travails; feel free to comment on this blog with any travel travail you have endured.
Labels: Ellen Roseman, lost baggage, lost luggage, rental car, travel, vacation