A few years ago, after watching the movie The Bucket List my wife Lori and I created our own Bucket Lists. We had three adventures in common: going on Safari, watching polar bears in Churchill Manitoba and visiting the Galapagos Islands. In late October we crossed the Safari entry off our lists, as we traveled to Botswana and South Africa for a couple weeks. The trip was ostensibly for the purpose of going on safari; however, since we figured we had traveled so far, we included sometime in beautiful Cape Town. 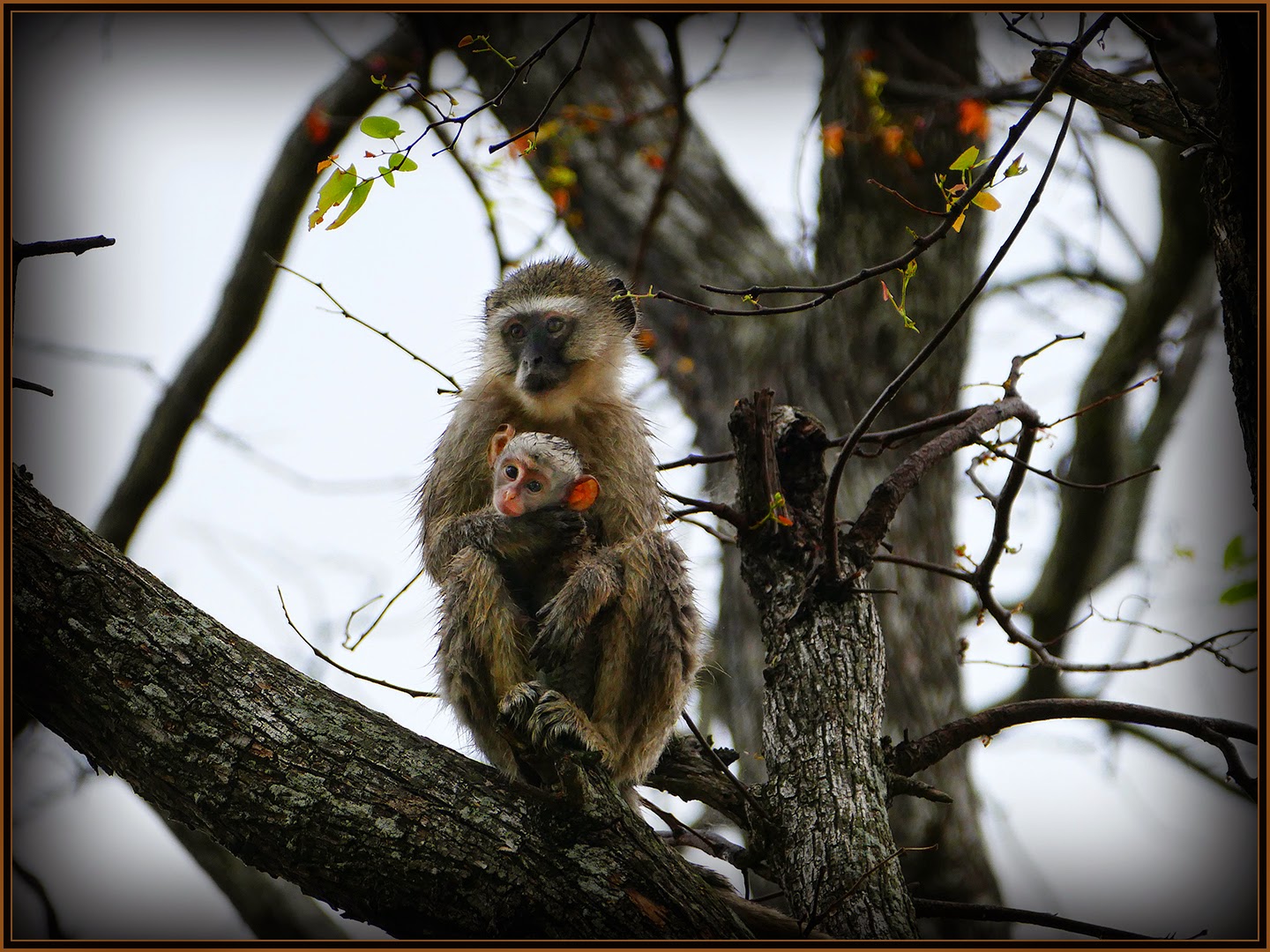 In one word the trip was awesome. Our safari experience actually exceeded our high expectations and our lodge/camp accommodations were excellent. However, in all honesty, it was also exhausting. We had twelve plane rides over those couple weeks, a seven hour time difference and many 5:00 am safari starts to our day.

Over the next two weeks, I will be sharing our trip highlights together with some of the beautiful pictures my wife (the photographer of the family) took. So if you came to the blog for the usual tax/financial discussion and are not interested in my African experiences, check back January 19th, when I will be writing about the uplifting topic of death and taxes.

I started planning this trip a year or so ago. I spoke to many people who had gone on Safari to South Africa, Kenya, Tanzania and Botswana. I also read through many comments on tripadvisor, several articles and various blogs on safaris. I was able to narrow down where I wanted to go and what I wanted to do. However, I was a little overwhelmed with all the various offerings. I was having trouble putting everything together in a coherent travel plan and making the appropriate camp/lodge selections. Luckily, we were referred to Cheryl Gould, a South African working for Lion World Travel in Toronto, a company that specializes in South Africa. Cheryl listened to our needs, provided us excellent suggestions and alternatives, and put together a wonderful itinerary. Cheryl also co-ordinated our Botswana tour operator, Wilderness Safaris and our South Africa tour operator, Thompson's Africa. Both operators were first class in respect of transport, pick-ups and tours.

We decided to visit two camps in Botswana, the Kwetsani Camp in the Jao District in the Okavango Delta and the Savuti Camp in the Linyanti Reserve along the Savuti Channel. Kwetsani provided us with many highlights and memories; however, it proved to be a lot less bloody than our experiences in Savuti and Kruger Park which I will recount in the next two blogs.

To get to Kwetsani, we flew from Johannesburg to Maun on a commercial airline and from Maun we took a small ten-seater type plane to an airfield in the bush.

Kwetsani is one of the most remote camps in the Okavango. It’s situated on an island and is considered more of a wet camp, as opposed to Savuti which was considered more of a dry camp. We arrived just at the end of the “dry season". They had not yet had any rain in Kwetsani, but never fear, the Goodfields brought rain, which was appreciated by the residents and animals, but initially not so much by us.

We were picked up by our guide Dennis Smith at the airstrip and taken to the camp. The camp is managed by the husband and wife team of Dan (a well-respected wildlife photographer) and Charmaine (a wildlife activist) Myburg. Our assigned room, or more accurately described as a tented tree house, provided us with a beautiful view of the delta together with our neighbors, the baboons.

Red lechwe, kudo, elephants and zebras casually grazed around us during our first safari. As we were returning from our safari, Dennis pointed out lion prints in the sand and told us these lions had been gone ten days and he was happy to see them back and we would track them the next day.

The next morning we headed out at dawn for our safari with Dennis. As we had brought rain, it was actually cold and damp, a weather condition that seemed to follow us our whole trip. Despite the weather, we still managed to see an ostrich and her baby, bushbuck, a wart hog hiding in a hole, hippos, wildebeests, zebras, elephants and we tracked a buffalo (see picture below) to a watering hole. We were quite pleased with the results of this safari. 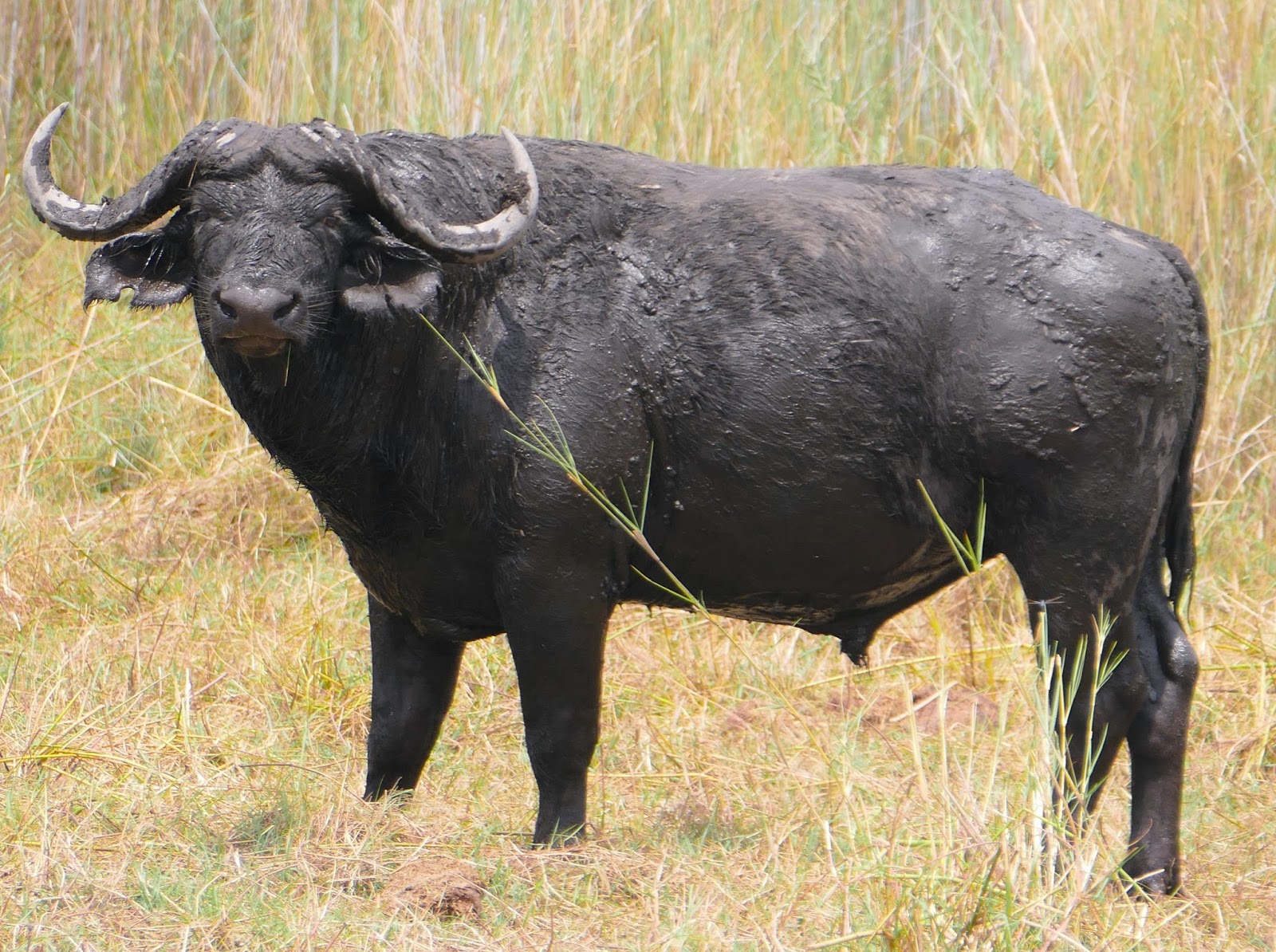 At lunch, Dan provided Lori with some much appreciated tips on photographing animals. In case you are wondering, my job was to video tape.

Around 4:00pm we set out on another safari, this time with the sole intention of tracking the lions. After a half hour or so Dennis found them.

There were four cubs, one male and three female and two lionesses. For the next couple hours we just stayed with them (I learned an important part of a Safari is just being patient and waiting for something to happen or not). I was impressed with the love and attention the lionesses had for their cubs and how playful they were. They would play fight and roll over on their stomachs just like a cat or dog. At one point the lionesses saw some elephants in the distance and jumped up with interest. We were not sure if they were going to hunt them. However, they settled back. A little while later, the male cub saw a mongoose and started tracking it for a kill. Dennis said he was still learning and it would be 50/50 if he would catch the mongoose. Eventually the mongoose got away, but it was interesting to watch the cub learn how to hunt. 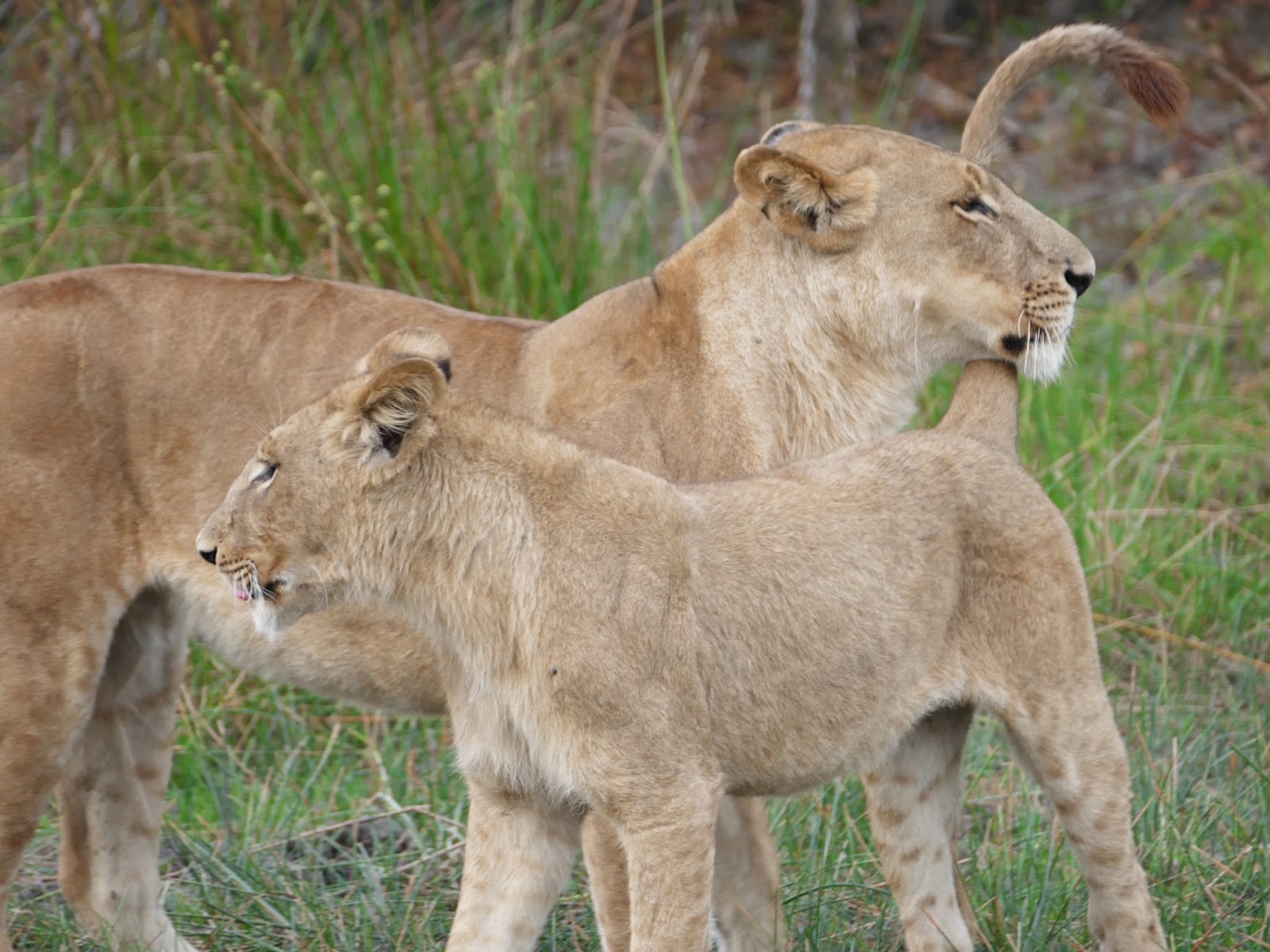 As you can tell by the pictures, we were very close to the Lions. I would say 5 to 20 feet at various times. Dennis carried no weapons. I personally was a bit confused. Lions are deadly predators and I was sitting in a range rover with no protection just a few feet away.  I was thinking, are these Lion’s really untamed or have they been tamed over the years by human interaction?

Dennis, Charmaine and Dan later clarified this issue for me. They explained  that after years of seeing humans in range rovers, the animals and their offspring were used  to the vehicles and do not see them as a threat. However, should you get up suddenly from your seat or get out of the vehicle, the animal will either run off or attack you.

That night we were very lucky. The camp was in between guests and we had Charmaine and Dan all to ourselves at dinner. We found out that they are in the process of putting a fascinating book together. The book features Dan’s awesome wildlife photographs and Charmaine’s poetry. The poems express an animal’s perspective of threats to them and their environment, such as how they feel as they are shot and killed in a canned hunt.

Canned Hunting is defined by Wikipedia as “a trophy hunt, in which an animal is kept in a confined area, such as in a fenced-in area, increasing the likelihood of the hunter obtaining a kill". From what I understand, people raise lion cubs (or other animals) on ranches until one day they are let out in the "wild". The freed lion is baited with food into the shooting range of a hunter who has paid for the right to kill the Lion. Lori and I were quite taken aback by this concept. 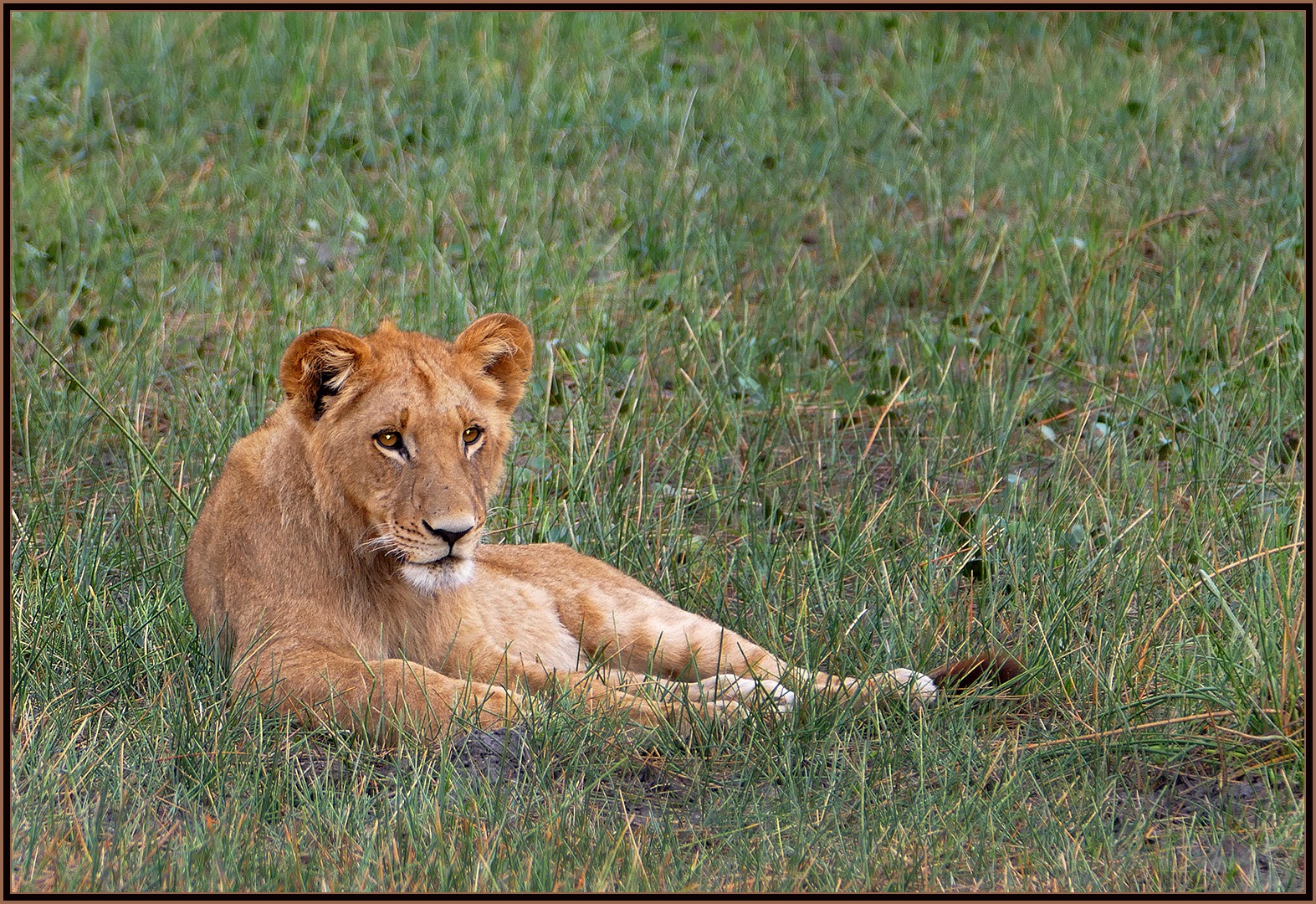 After telling us about their book, Charmaine an engaging storyteller recounted an amazing story about the lions of Kwetsani. We learned there is an interesting natural order selection process going on and she shared with us the miracle of the survival of the cubs we had just seen and the history of the lion pride in the area. The cubs born the last few years had either drowned or been eaten by crocodiles crossing the flood waters. We were fascinated and grateful for her insight and now understood how important these lions were to the Kwetsani region why they were so very dear to Charmaine, Dan and Dennis.

The next day we said our goodbyes and were taken to the airfield and flown to Savuti, where the action quotient would be raised to a whole other level.


This site provides general information on various tax issues and other matters. The information is not intended to constitute professional advice and may not be appropriate for a specific individual or fact situation. It is written by the author solely in their personal capacity and cannot be attributed to the accounting firm with which they are affiliated. It is not intended to constitute professional advice, and neither the author nor the firm with which the author is associated shall accept any liability in respect of any reliance on the information contained herein. Readers should always consult with their professional advisors in respect of their particular situation.
Labels: Botswana, buffalo, Cheryl Gould, elephant, hippo, kwetsani, lion, Lion world Travel, ostrich, safari, savuti, South Africa, thompson africa, wart hog, wilderness safaris, zebra