On Monday, you read about my special safari experience at the Kwetsani Camp. Today, you will be a part of my unforgettable encounter with Wild Dogs at the Savuti Camp, located in northern Botswana.  Heads up; this blog has a graphic picture at the end of the post (although, I picked one of the least explicit photos).

Upon arrival in Savuti (on our mini-me plane), Goodman, our guide, greeted us. Goodman guiding the Goodfield’s, how’s that for a co-incidence. Lori read great things about Goodman on tripadvisor, so we knew we were in good hands. Our safari wish list in Savuti was to see wild dogs and a leopard.

This camp is surrounded by a watering hole, yet considered a dry camp. Go figure that? 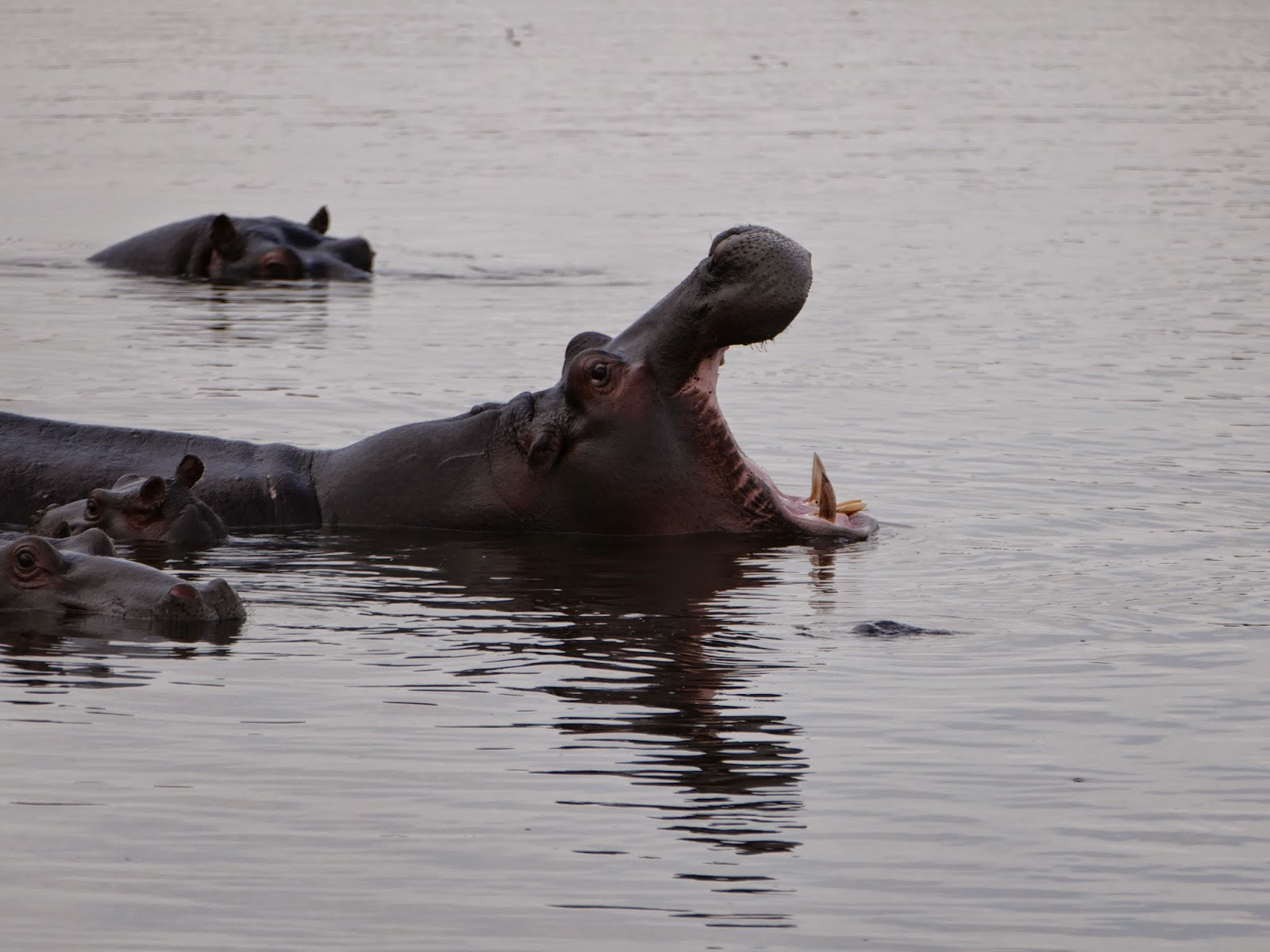 Our accommodation was a beautiful  tented room raised off the ground on platforms, with hippo’s swimming in front of our deck. The downside to this room were the frogs who croaked continuously throughout the night. Savuti Camp was a different experience than the Kwetsani Camp. Kwetsani was more charming with only five rooms and it took on the personality of its managers, Savuti, with its seven rooms, is more of a well-oiled machine, friendly, but more structured. We enjoyed both.

Once we were settled, we set off on a dusk safari with Goodman and another couple from the United States. It is an interesting dynamic when you have another couple in the vehicle. This couple, while nice, was older, moved slower and was keen on bird watching, not necessarily our style or speed. We appreciated the guide’s challenge to keep everyone happy. Goodman did it well as he found a leopard that was in the process of finishing its impala dinner. Actually, there was not much left of the impala when we arrived and the leopard was generally content to just hang out as her belly was full. So to this point, our viewing of animal kills was fairly tame, however, that was about to change drastically.

Goodman informed us that for the next mornings safari, we had him to ourselves and we were going to head out at 5:30 am to track wild dogs. The weather was overcast and surprisingly chilly. It is hard to put into words what our morning was like: it's best described as “we ran with the wild dogs”.

We started our day with a 40 to 50 minute drive to get us to an area where Goodman hoped he could track the wild dogs. To our delight, we successfully found a pack of 4 or 5 wild dogs. The dogs were moving east and howling like crazy. Goodman told us they were howling to make contact with the rest of their pack (wild dogs are known as very social animals). We followed the dogs for a while, when suddenly a hyena came out of the bush; our first hyena sighting of the trip. 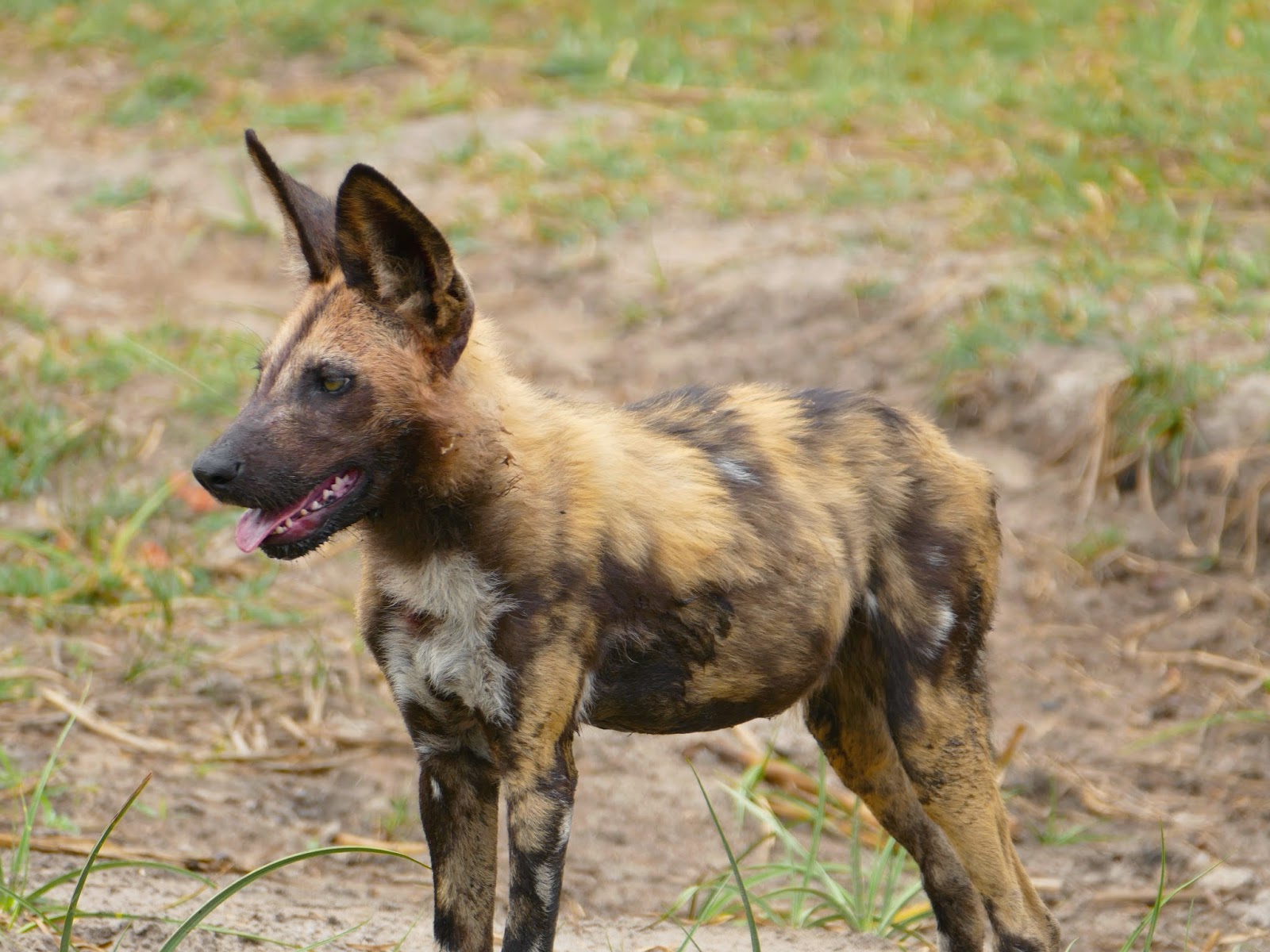 As you can see from the picture, wild dogs look like a cross between a dog and a hyena.

At around 9 am Goodman said “they are just playing around and not ready for a kill so let’s just have some breakfast”. He then took us along the river bed and took out some coffee and pastries. Picture this; we are standing on the ground, out of the vehicle, waiting for our coffee when we see a few hundred yards away the wild dogs running in our direction. Goodman continues on as if it is nothing asking how we would like our coffee. Lori and I are starting to become a little concerned as we have watched the wild dogs on YouTube ripe apart animals with their huge sharp teeth and we would like to avoid that fate. Goodman says “don’t worry, they are used to humans and will leave us alone.” As they get closer we have to decide if we trust him or not. Lori keeps asking him if he’s sure it is okay to stay where we are and he says “yes”. As the moment of truth arrives, I will be honest; I put one foot on the step of the range rover and kept one foot on the ground. Lori showed real guts, she kept both of her feet on the ground. The dogs stoped a few feet from us, stared us down then continued running off down the river.

Goodman says “let’s have our coffee quick and then we will follow the dogs as they look ready for a kill”. We are a bit confused as to why we were told to stay put, when they are ready for a kill, but I guess the Goodfield’s are not a wild dog’s food of choice. We jump in the vehicle and start to follow the dogs; however, we lost them in the bush. I see something in the distance and tell Goodman who zips off. It turns out I saw a wart hog, not a dog and we turn the vehicle just in time to see an impala running in the opposite direction with fear in its eyes. Goodman says the dogs are going after an impala and he speeds off to find the wild dogs. A minute later he finds the wild dogs. In that one minute time span, they have caught and killed an impala. So we arrive just seconds after the actual kill.

Watch out for what you wish for! Lori and I wanted to see a kill (which we just missed) but are now going to see the feeding frenzy. We discussed this possibility before the trip and whether we 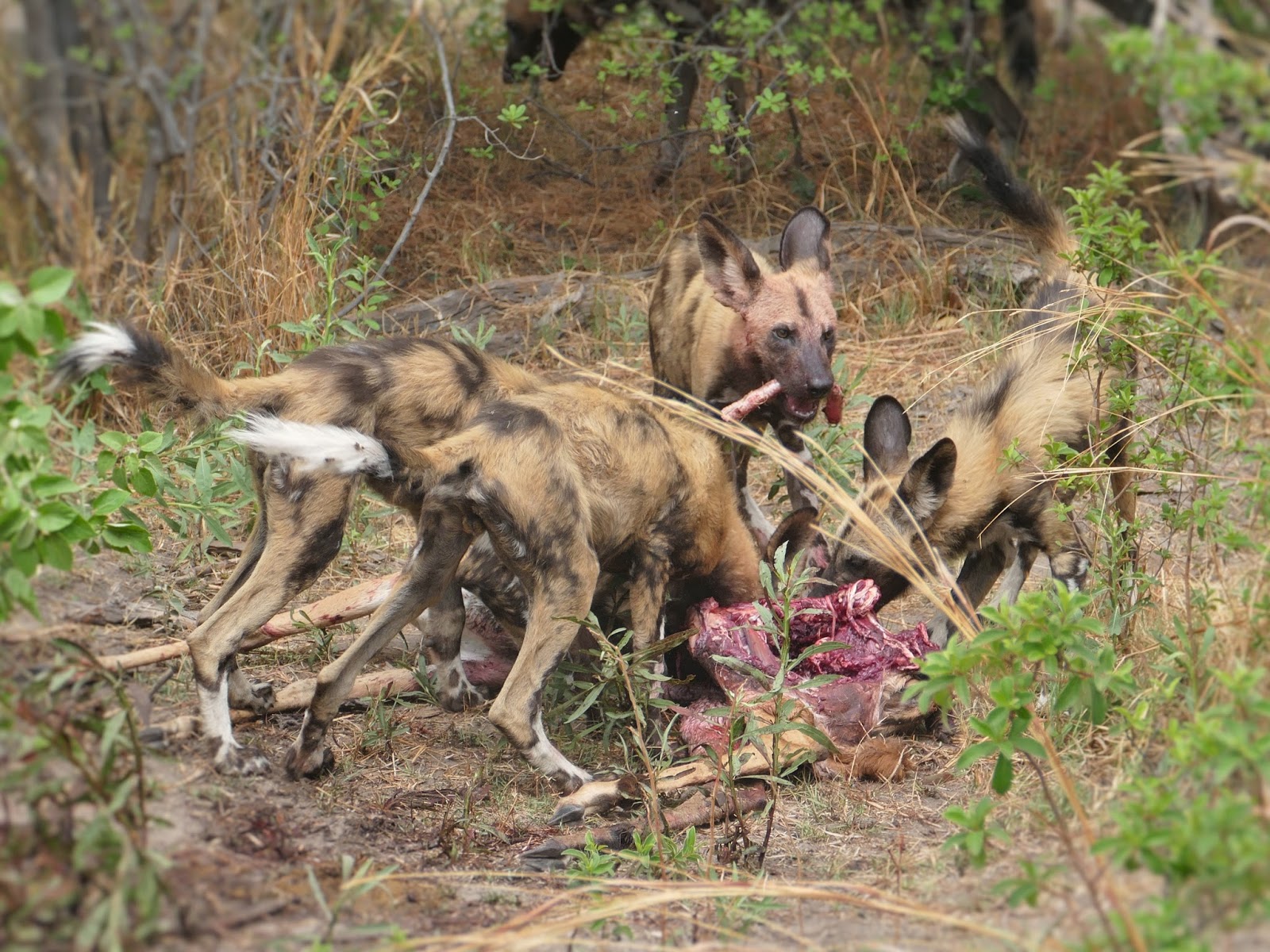 would be disgusted by watching a feeding or a kill or be intrigued by it. As we watched the wild dogs eat the impala, first the babies ate, then the adults came and essentially ripped it into pieces, we both said we were more intrigued then disgusted, although Lori said she was little queasy.

To complete our run with the wild dogs, we followed them to a watering hole where they drank and washed up, so to speak. We then headed back to camp from our awesome adventure. We saw some other very interesting things, including elephants crossing a river and lots of beautiful birds, but nothing matched the thrill of the wild dog adventure.

We then flew from Savuti to Maun and Maun to Johannesburg for the night. The next morning we flew to Mpumalaga for our final safari at Lion Sands Game Reserve just outside of Kruger Park.

This site provides general information on various tax issues and other matters. The information is not intended to constitute professional advice and may not be appropriate for a specific individual or fact situation. It is written by the author solely in their personal capacity and cannot be attributed to the accounting firm with which they are affiliated. It is not intended to constitute professional advice, and neither the author nor the firm with which the author is associated shall accept any liability in respect of any reliance on the information contained herein. Readers should always consult with their professional advisors in respect of their particular situation.
Labels: Botswana, elephants, goodman, hippo, Kwetsani Camp, Savuti Camp, tripadvisor, wild dogs