You are about to read the final post on my African adventure series.

Warning: This blog contains two graphic pictures (Note: any photo can be enlarged by clicking on the image).

In my previous two posts (part 1 & part 2) I discussed our stay in Botswana. We completed our safari experience at the Lions Sands Game Reserve, located on the western border of the famous Kruger National Park in South Africa. Lion Sands is a luxury reserve. Since we were on a bucket list trip, we decided to splurge for two nights. The accommodations were superb and the food was gourmet. This is definitely not your Safari on a budget pit stop.

The game viewing at Lion Sands was outstanding, thanks in large part to our guide Ferdie Muller and our tracker, Rector. We had not had a tracker to date and it was very interesting to watch Rector look for footprints and dung. Yes, tracking is done as much by dung as anything else.

We shared a jeep with a young couple from the U.K. that were pretty much in sync with what we wanted to see. As we headed out on our first safari, Ferdie told us that a Rhino had recently been killed in a fight with another Rhino and that Lions were now eating the carcass. 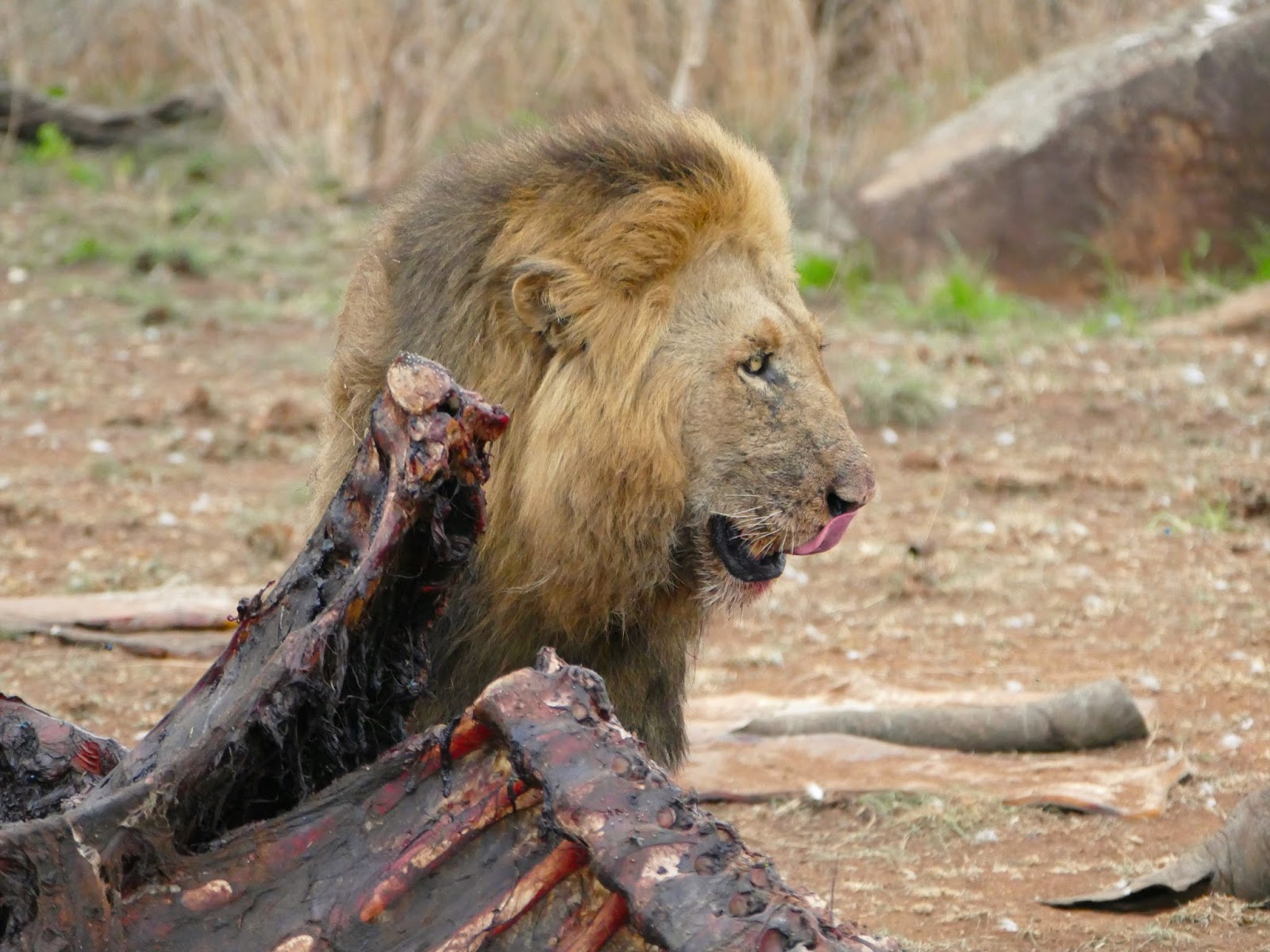 We knew we were approaching this site when we saw like a 100 vultures hovering in the sky. I am not exaggerating, there may have been even more. Watching three lions feasting on the Rhino was fascinating; although depending upon the wind, the smell was terrible.

The next day we tracked a leopard in a tree with an impala it had just killed. This was mesmerizing. Somehow the leopard had dragged the impala up into the tree and hung it over the branch like laundry hanging on a clothesline. 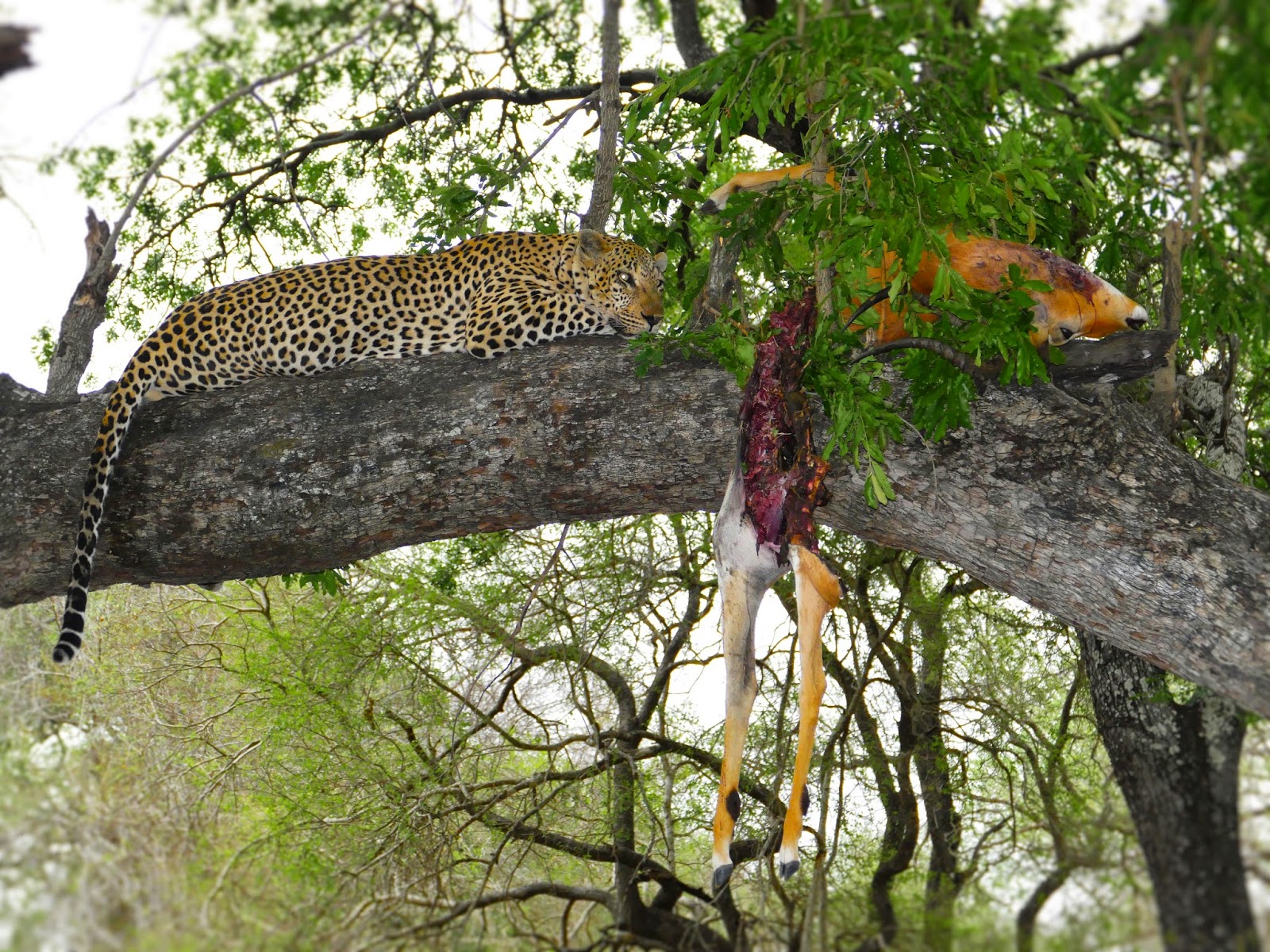 That night as we were driving, Rector stuck out his hand. He had us get out of the vehicle and he showed us a leopard paw in the sand. He then told us to look at the flat drag mark near the paw; which he said was an impala being dragged by a leopard. Ferdie then followed Rector’s directions as we tried to track that leopard. Two minutes later we found the dead impala hidden in the bushes. Ferdie said we must have just missed the kill and scared off the leopard. If you have been paying attention to my series, you will know you do not wish to be reincarnated as an Impala ☺. 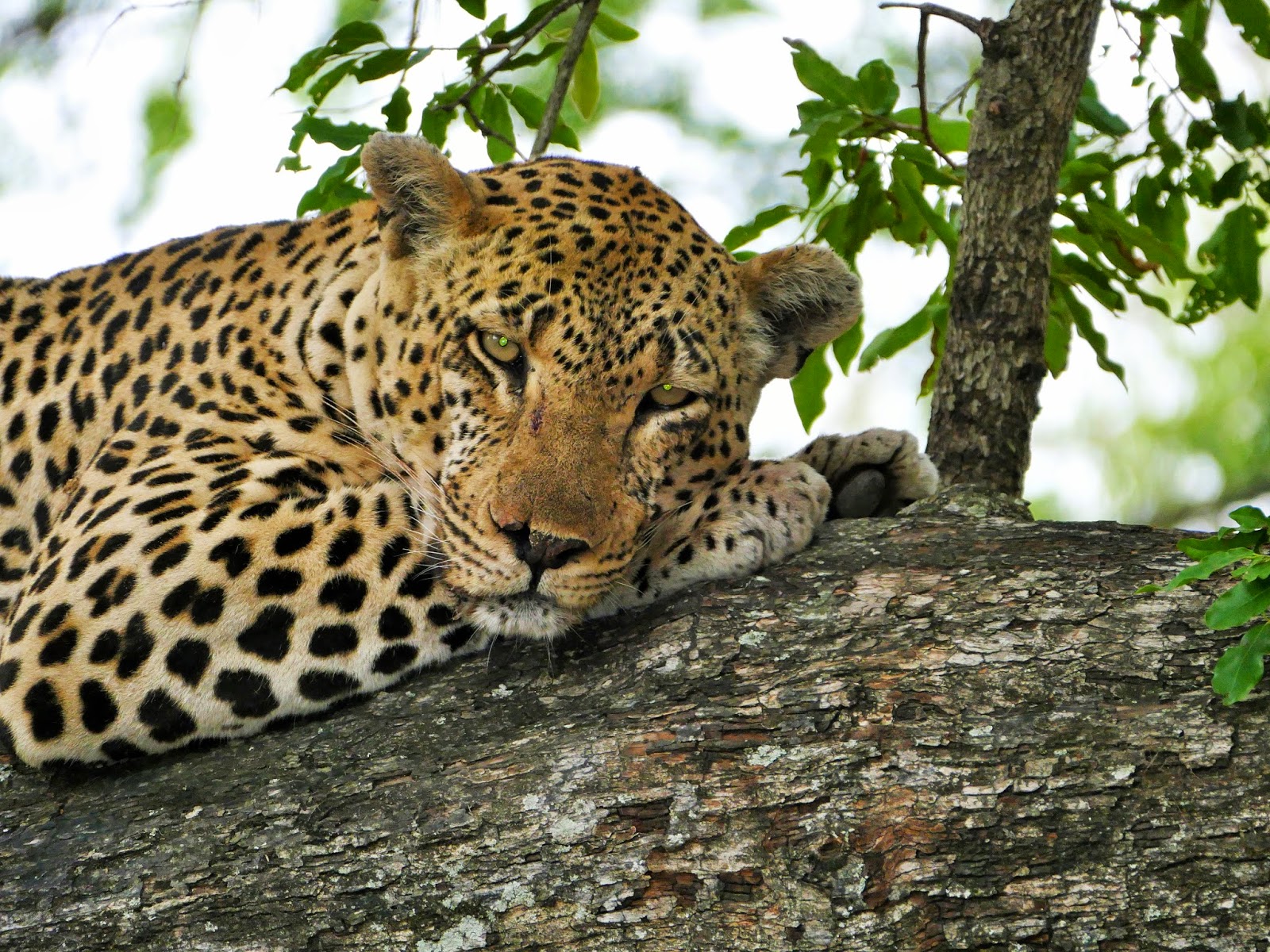 That day we also found a hyena den, with some babies and tracked a lion for over a couple hours through thick bush until Ferdie found it below us in a valley. The tracking experience at Lion Sands was extremely interesting and educational. 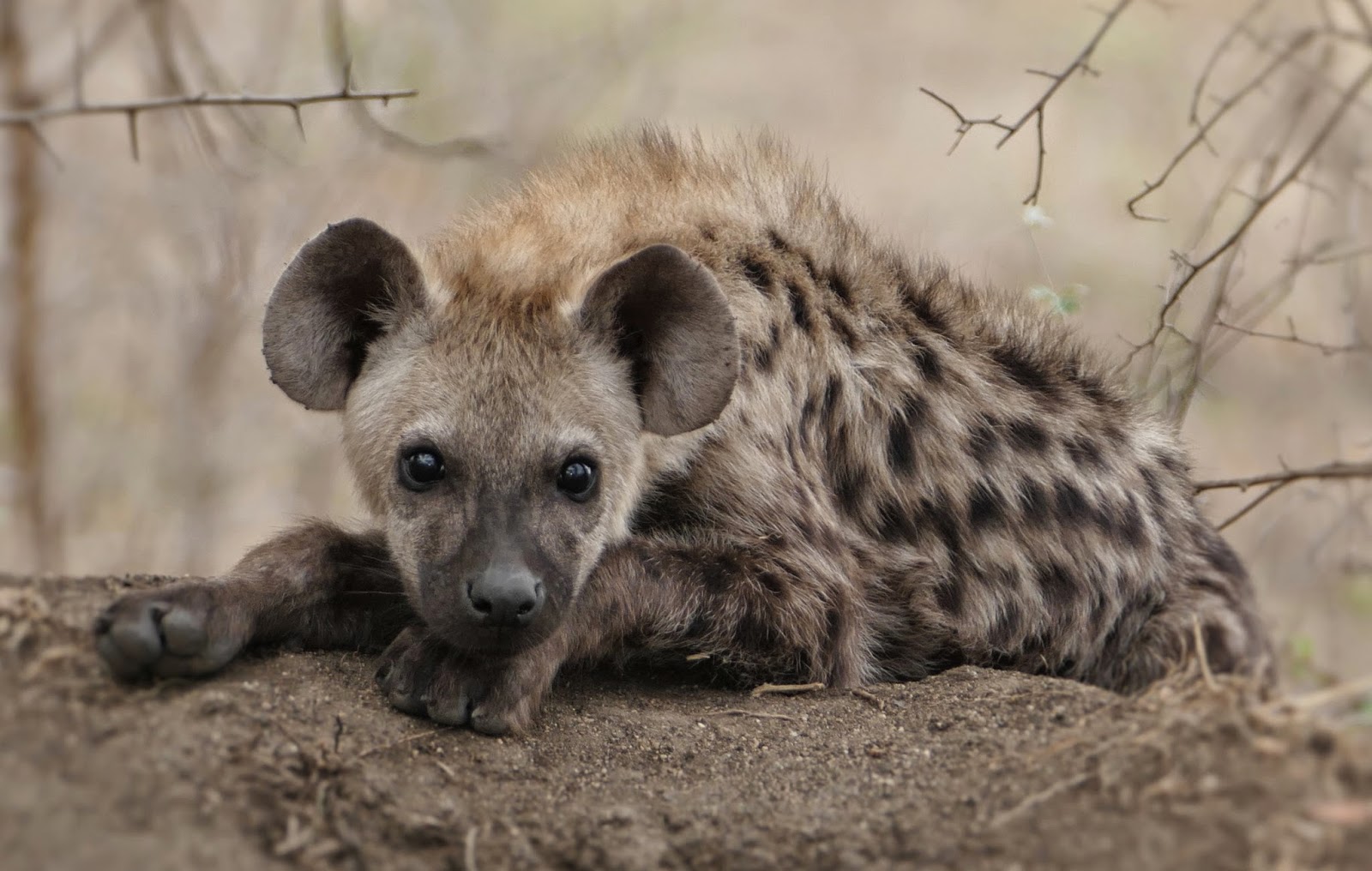 You may have noticed I have not mentioned that we saw rhinos (other than the dead one being eaten by the lions). I am not posting any information or pictures about the rhinos as they are constantly being poached for their horns to send to Asia for medical and aphrodisiac reasons and I have no intention to provide any location details.


We concluded our trip by flying to Cape Town, where we stayed at the Twelve Apostles, a beautiful hotel in Camps Bay just outside of Cape Town that overlooks the Atlantic Ocean.

Cape Town is a stunning city with mountains, water and beaches. It is often ranked as one of the most beautiful cities in the world and within five minutes you can see why. It also has some tremendous restaurants and seafood. We loved our dinner at the Codfather in particular.

Cape Town also has a dark underside, with Shanty Towns and townships that look like you are in the third world. The contrast is startling and we were constantly warned to be careful where we walked and be cognizant of who was behind us. The local people we chatted with provided us different opinions on the current status and future of Cape Town and South Africa. Some were optimistic, others not very hopeful. South Africa is a complicated country still sorting itself out and I for one am far from qualified to offer an opinion other than noting the huge contrasts I observed.

By co-incidence, one of my staff members was in Cape Town at the exact same time we were; with her father who was born there. Her father graciously offered to be our chauffeur and guide for the day. He picked us up at 9 and returned as at 5 and we felt like we saw all of Cape Town. He took us through Camps Bay to Lions Head for a view of Cape Town and then onto Fish Hoek and Simon's Town. We stopped at the Scratch Patch to shop for local jewelry, went to Boulders Beach to see the penguins, 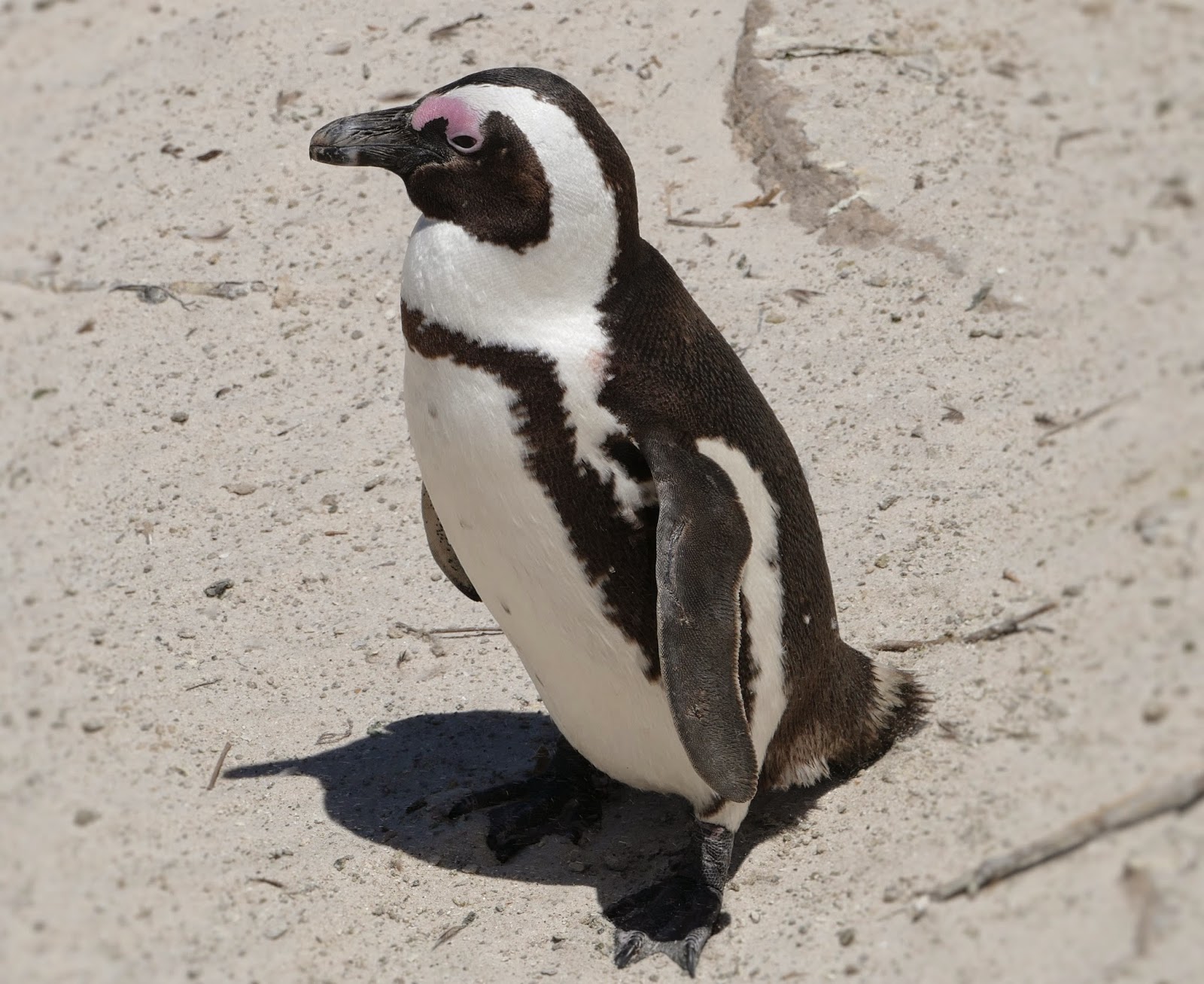 drove to Cape Point and took a cable car to the top, went back along the coast and to Chapman’s Peak for an awesome view and onto Hout Bay for some great fish and chips. The next day they found a killer cobra snake on the beach we walked at Hout Bay. It was a full and great touring day and we appreciated our host and his insights into Cape Town and South Africa.

The following day we had booked a car to take us to Franschhoek and Stellenbosch (the wine
country outside of Cape Town) and notwithstanding Lori’s diligent research, our driver Bryan had his own ideas for the day. He came into the car and told us which wineries he recommended and booked lunch for us at the Delaire Graff Restaurant. He did not disappoint with his suggestions and the food and view were spectacular at Delaire Graff.

One of the wineries we visited was the Avondale Wine Estate. Avondale is an organic winery and its proprietor Johnathan Grieve is a pioneer of the BioLOGIC® approach to sustainable viticulture. He oversaw the transformation of Avondale from over-used and abused land into a thriving, robust vineyard. This was an interesting visit, as the considerations and issues in organic wine making are numerous and captivating.

We concluded our day with a quick visit to the Kirstenbosch National Botanical Garden. This is a highly acclaimed botanical garden. However, because of the time of year, we missed the blooming of most of the flowers and were a bit disappointed in our visit.

We then caught the last stunning sunset from our hotel room and readied ourselves for our journey home, which is the downside to any trip to South Africa. We left for the airport on Wednesday morning at 10:30 to fly from 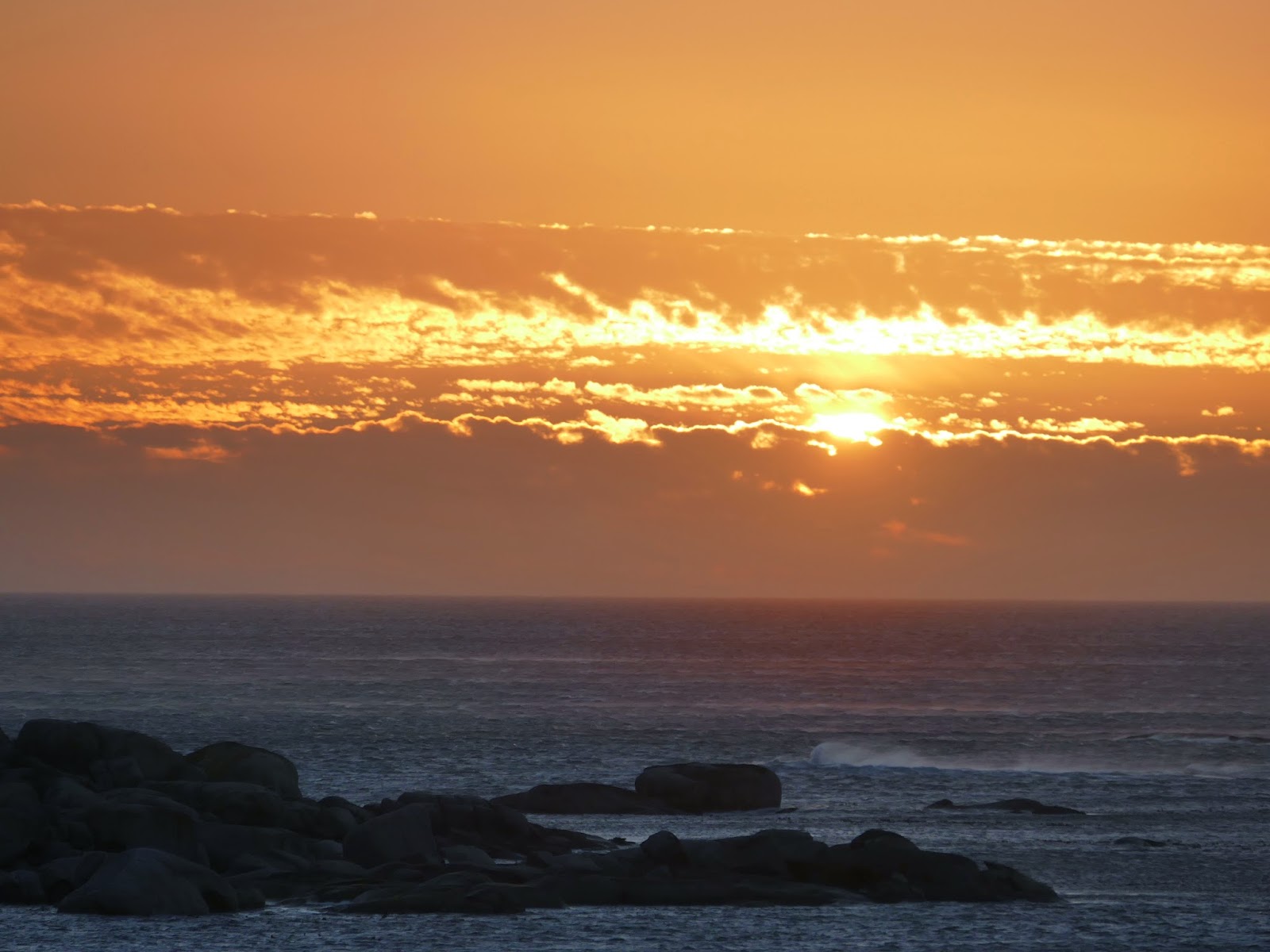 Cape Town to Johannesburg to New York and then on to Toronto; 30 hours or so later, we arrived home—exhausted but exhilarated.

That’s it for my African adventures. I hope you found these posts interesting. Next week I get back to my regular tax/financial/money fare.


This site provides general information on various tax issues and other matters. The information is not intended to constitute professional advice and may not be appropriate for a specific individual or fact situation. It is written by the author solely in their personal capacity and cannot be attributed to the accounting firm with which they are affiliated. It is not intended to constitute professional advice, and neither the author nor the firm with which the author is associated shall accept any liability in respect of any reliance on the information contained herein. Readers should always consult with their professional advisors in respect of their particular situation.
Labels: African adventure, Capetown, Codfather, leopard, lion, Lion Sands Game Reserve, rhino, safari, South Africa