Over the years, I have often suggested, probably to the point of ad nauseam, that I think you should make a Bucket List (A list of things to do before you die. Comes from the term "kicked the bucket"). I keep preaching this point because I’ve seen too many people never get to do the things they dream of, due to financial, health or age related reasons. 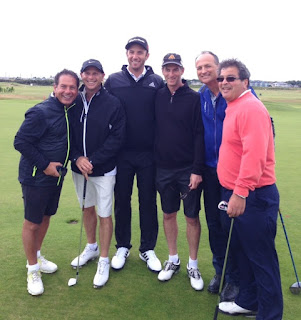 Personally, over the last eight or so years, I have crossed off multiple items from my Bucket List. For some of the more ambitious items on my list, such as my safari to Africa and playing golf at Pebble Beach, I have posted blogs detailing my experiences. One adventure on my list I did not recount was a golf trip I took last year to Ireland. It was an awesome trip and on a cold blustery typical Irish golf day, my friends and I and maybe only ten other people watched Dustin Johnson play a practice round for the British Open.

Bucket list items need not be extravagant trips. My list included watching a baseball game at Wrigley field and taking guitar lessons (which resulted in tennis elbow and quickly derailed my guitar playing to the relief of my families ears). The most recent item crossed of my list, was a visit to the Rock & Roll Hall of Fame (“RRHF”) in Cleveland. My wife took me for my birthday.

During my jaunt to Cleveland, I also attended a Cleveland Cavalier game in which Lebron James was his usual magnificent self (the game happened to be a throwback night to celebrate the 1976 Cavalier team, so the Jumbotron included a video clip of the current Cavs players dressed in 1970’s attire with a Soul Train motif in which many of them danced to the amusement of the crowed). The dancing is caught on this YouTube video. If you remember Soul Train and know some of the Cavs players, you will enjoy this video.

If following celebrity chefs is your thing, you’ll appreciate that we finished off our Cleveland experience with an awesome dinner at Michael Symon's restaurant called Lola’s.

Anyways, before I fall off my Soap Bucket - get it, soap box :) here’s a quick summary of the RRHF.

The Rock and Roll Hall of Fame 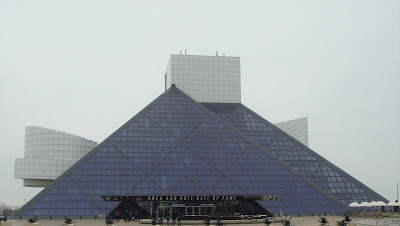 The first thing that strikes you about the RRHF is the structure itself. The building was designed by I. M. Pei, one of the world’s most famous architects. It is a really beautiful building.

While I thoroughly enjoyed my time at the RRHF (I was there for over 6 hours) and would recommend it to any music/rock fan, I can’t say there is one overall thing that stood out to me. It was a well- balanced combination of exhibits, video clips and interactive displays. My wife and I were struck by how disruptive rock and roll was to the “establishment”, both at its beginnings and again in the late 60’s and early 70’s.

The first floor of the exhibit was my favourite. It included among various exhibits:

(1) a gallery dealing with the Roots of Rock

(2) an Elvis exhibit (not really my thing)

(5) a legends of Rock exhibit that included clothing/costumes, pictures, video’s on such greats as the Beatles (see picture below), Rolling Stones, Jimi Hendrix, Doors, U2, David Bowie etc. 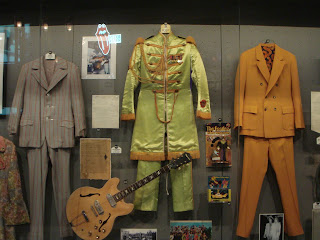 We enjoyed the colorful and historical guitars and instruments exhibited throughout the floor and the outfits/costumes worn from everyone from Led Zeppelin, to the Beatles, to even the black dress worn by Stevie Nicks on the Rumours album (yes like every teenage guy back then, I had a crush on Stevie).

There were also several fun interactive exhibits such as the one where you discover who inspired your favourite artists. There was also a new Graham Nash exhibit on while we were there.

The second floor provides a historical backdrop to how rock and roll began. Have you ever thought of all those one-hit-wonders you listened to when you were a kid? We had a blast on the second floor which hosted an interactive exhibit where you can search from A-Z for your favourite ones. You forget many of these songs until you see them listed. You then wonder why one only hit?

The third and fourth floors have such things as glass panels with the signatures of inductees and a Pink Floyd: The Wall exhibit. But, I must admit, I spent much of my time on these floors watching film footage and video that tell the story of the inductees and provide musical highlights of the induction ceremony concerts. For example; we watched a concert in which Stevie Wonder played with B.B. King, John Legend, Sting and Jeff Beck, which I really enjoyed. 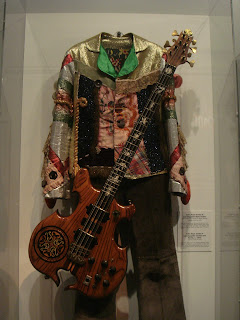 My timing was a bit off, as I just missed a Herb Ritts rock portrait exhibit that ended the week before and had gotten rave reviews. The next exhibit unfortunately was under construction.

If you are a music fan, especially a rock fan, you’ll want to add the RRHF to your bucket list. You will not be disappointed by the venue or the exhibits.

Bloggers Note: I will not be posting again until May 9th. I have also disabled the ability to comment on this or any prior blog post. I apologize, but I am too busy during tax season to answer the various questions and comments I receive.


This site provides general information on various tax issues and other matters. The information is not intended to constitute professional advice and may not be appropriate for a specific individual or fact situation. It is written by the author solely in their personal capacity and cannot be attributed to the accounting firm with which they are affiliated. It is not intended to constitute professional advice, and neither the author nor the firm with which the author is associated shall accept any liability in respect of any reliance on the information contained herein. Readers should always consult with their professional advisors in respect of their particular situation.
Labels: bucket list, Cleveland, Lola's, Michael Symon, Rock and Roll, Rock and Roll Hall of Fame