In the old days of this blog, I would occasionally veer off from the financial focus of The Blunt Bean Counter and write about travel (like my trip to Africa with my wife), general business topics (like the four Ps of public speaking), and other topics like sports and food. Over the last while, I have kept on topic. To start the new year, I thought I would lighten it up and write about TV series or mini-series I watched during COVID. Don’t fret: my next post will get back to finances when I revisit my 2014 six-part series on how much money you need to retire. 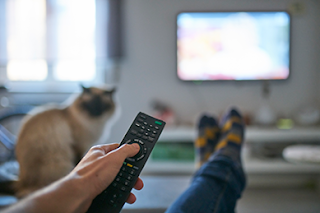 At the start of the pandemic, I was busy assisting my clients with the various new or updated government programs and helping them manage their businesses through the lockdown—so I did little TV watching. And after that I was busy with personal taxes and corporate filings until July. But since August I’ve accelerated my TV watching in between summer golf games.

Below I list my favourite series during the pandemic—some old, some new and some just released. We all have personal preferences in what we want on TV (and we also may be limited what we can watch by our TV subscriptions, as there seems to be unlimited subscription options). I like TV series that are so compelling or gripping that I can’t stop watching or cannot wait until next week’s episode. I also like a great comedy (few and far between, although I really enjoyed Schitt’s Creek the first couple of years and watched it when it came out on CBC) or, alternatively, something very unexpected, such as the The Queen’s Gambit on Netflix, which I discuss below. Here are my top five:

I know Game of Thrones (GOT) is one of the most popular TV series ever, but I am not a fantasy fan (nor am I a sci-fi or horror type of guy) so I was never that keen to tune in. A couple years ago I watched 10 minutes of an episode to see what the fuss was about, and that show happened to be heavy on dragons and various fantastical things. So I decided GOT was not for me. But my wife and I agreed to give the series one more try, and to my surprise, the first season was gripping and had very little fantasy or dragons. By the time the series became more fantastical, I was hooked, and the dragons and fantasy felt natural in the normal course of the show. Like many, I did not love the ending, but eight seasons filled a lot of COVID time. I watched this on Crave.

Per Wikipedia, “The Queen's Gambit is a fictional story that follows the life of an orphan chess prodigy Beth Harmon, during her quest to become the world's greatest chess player while struggling with emotional problems and drug and alcohol dependency.”

Beth is played by Anya Taylor-Joy, and she is awesome in the role. I loved this Netflix show because I had no idea what it was about and figured it was some boring chess show. Far from it. Beth is an extraordinarily complex and compelling character, who is super-cool, albeit with some issues, yet still a chess “nerd” at heart. This show was so unexpected, and I really enjoyed it.

It is my understanding that the show and the complex chess strategies it reflects, together with the hip character created by Anya, have created a chess craze across the world. Chess memberships are reaching record highs and chess boards are becoming scarce. Perhaps I’ll move from chess-watching to chess-playing in 2021.

I watched this Apple TV (thanks to a free year due to an ipad purchase) show on the recommendation of a friend who is a Manchester United soccer fanatic, so I expected to watch one episode and report back it was boring. To my pleasant surprise, this show about an American football coach brought in to coach a premier English soccer club (the owner wanted the team to be poorly coached and play poorly to get back at her ex-husband, the former owner) was very funny and heart-warming without going over the top. Apparently, the star, Jason Sudeikis, first conceived the idea as an actual Premier league promo for NBC. In any event, it’s a fun, light series.

Mindhunter is the story of FBI agents Holden Ford and Bill Tench and psychologist Wendy Carr, who operate the FBI's famed Behavioral Science Unit at the FBI Academy in Quantico, Virginia. In the unit's earliest days, they pioneer the study of serial killers by interviewing some of the most depraved in American history. They visit prisons around the U.S. to talk to men such as Charles Manson and understand how they think. Knowledge will help them catch future serial killers, they hope.
Based on a true story, Netflix's Mindhunter boasts the involvement of A-list movie director David Fincher. While the show is a bit slow at times, I found it compelling and enjoyed both seasons (supposedly a third will not happen or not happen again for several years). Some of the criminal characters were so intriguing that you almost forget they committed heinous crimes.

This Apple TV show was again a bit unexpected for me. I figured it was about a morning news show and would be light and fluffy, with Jennifer Aniston (playing co-anchor Alex Levy) as the star. I was taken aback when I quickly realized this show was about a current social issue, with co-anchor Mitch Kessler (played by Steve Carell) being fired for sexual misconduct at the network. Viewers see the insidious acceptance of this behaviour and culture of fear that news media have analyzed in the last few years when high-profile men were accused of sexual misconduct.

A couple of shows that just missed the list were the Undoing, a mystery psychological thriller starring Nicole Kidman and Hugh Grant, and You, a dark series about a bookstore manager who is also a serial killer (it reminds me a bit of Dexter, one of my all-time favourite shows, if you have ever watched that series).

Feel free to let me and the other readers of this blog know your top five series during COVID by posting them in the comments below. That way others can check them out.
The content on this blog has been carefully prepared, but it has been written in general terms and should be seen as broad guidance only. The blog cannot be relied upon to cover specific situations and you should not act, or refrain from acting, upon the information contained therein without obtaining specific professional advice. Please contact BDO Canada LLP to discuss these matters in the context of your particular circumstances. BDO Canada LLP, its partners, employees and agents do not accept or assume any liability or duty of care for any loss arising from any action taken or not taken by anyone in reliance on the information on this blog or for any decision based on it.

BDO Canada LLP, a Canadian limited liability partnership, is a member of BDO International Limited, a UK company limited by guarantee, and forms part of the international BDO network of independent member firms. BDO is the brand name for the BDO network and for each of the BDO Member Firms.
Labels: television shows