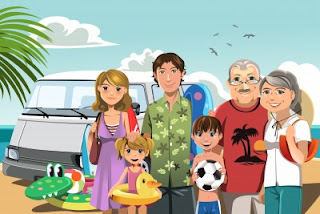 This summer I am posting the "best of" The Blunt Bean Counter blog while I work on my golf game. Today, I am re-posting a May 8, 2012 post on the merits of a grandparent/parent taking their family on a vacation if they have the financial means.


A Family Vacation- A Memory Worth Not Dying For

Another very poignant and moving example of the gift of travel is the story of Les Brooks. Les, a Vietnam veteran, had unresolved issues relating to the war and as he states in a Princess Cruises travel blog (unfortunately the link has expired)  “Vietnam was a place I left in 1966 praying I would never have to go back. But Christle sensed the deeper truth…I was curious about the place; I wanted and needed to see for myself what life was like today for the people of a country that I left so torn apart by war.”.


While Les’ gift was not a family bonding vacation, it was a gift provided while his mother was alive, a trip that may never have occurred if Les inherited the money and spent it otherwise.